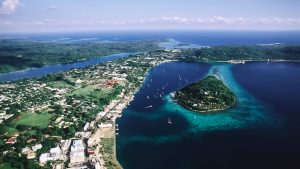 Australia and OceaniaVanuatuFood & Drinks in Vanuatu

There are many restaurants and cafes in Port Vila, ranging from high-end businesses catering to visitors and expatriates to more casual options. Lunch will cost you between 1000 and 1500 vatu, depending on where you dine and what you eat.

The typical meal, lap lap, is a root vegetable cake that you will most likely be served once during your visit. Essentially, this is manioc (cassava), sweet potato, taro, or yam shaved into the center of a banana leaf, topped with island cabbage and, sometimes, a chicken wing. This is all bundled up into a flat parcel and baked underground on hot stones until it all melts together like a cake. The best location to get some of these is in the food market in town, which should cost about 100 vatu.

This is a lap lap variant in which the cake is wrapped into a cylinder with meat in the center. It tastes similar to a sausage roll. These may be found in the market again (typically from mele village folks), but they will be served in foam boxes to keep them warm.

Vanuatu’s beef is well-known across the region. There will be posters at the airports advising you to pack the 25kg of meat allowed to other neighboring island countries. The meat is particularly excellent because it is entirely produced organically, with no feedlots or other issues associated with westernised mass farming. As a consequence, the steaks are very tasty.

As you would imagine from an island country, seafood is popular, and the quality is usually good. Restaurants often serve reef fish, as well as prawns, lobster, and the delicious coconut crab.

The coconut crab is only found in the South Pacific and Indian Oceans, and its population has been decreasing so fast that it is now a protected species in most regions. The minimum legal size in Vanuatu is four centimetres, although the monster may grow to be more than eight centimetres long with a limb spread of up to ninety centimetres. The crab’s name comes from the fact that it climbs palm trees to chop down and consume coconuts – nothing to do with the taste.

Kava is a traditional drink produced from the roots of the pepper plant Piper methysticum. Kava is intoxicating, but not in the same way that alcohol is. It has sedative properties. Some travelers have reported a hangover as a result of their drinking.

Kava is drunk in private homes as well as in local establishments known as Nakamal. On occasion, some of the resorts may provide kava for visitors to sample.

Kava is traditionally served in a “shell” or tiny bowl. Drink the whole shell-full slowly, then spit. Because the taste of kava is strong and unpleasant, it’s a good idea to have a soft drink on hand to rinse with afterward.

It is worth mentioning that the kava accessible in Vanuatu is usually considerably stronger than the kava available in other Pacific islands such as Fiji, where it is relatively mild. Four or five big shells at a normal kava bar can leave an unskilled drinker dizzy (or worse) within a few of hours, and recovery can take a day.

To have the most enjoyable kava experience, go with an experienced drinker and follow their example, take the tiny shells, and quit after an hour and a half. It’s simple to locate a native kava drinking companion; just inquire around your hotel and you’ll find volunteers – maybe for the price of a shell or two.

Kava bars (or Nakamals) are often dimly lit or have no illumination at all. This is because strong lighting and kava intoxication do not mix well – therefore be cautious with flash photography, which may not be well accepted in such settings.

Alcoholic drinks are readily accessible as well. A broad variety of beverages are offered at tourist-oriented resorts, pubs, and restaurants. “Tusker” and “Vanuatu Bitter” are the names of the local beers.