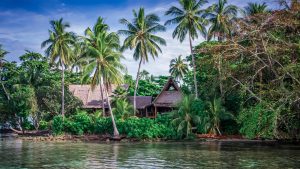 Melanesian people are said to have inhabited the Solomon Islands for thousands of years. It is thought that Papuan-speaking immigrants first arrived about 30,000 BC. Around 4,000 BC, Austronesian speakers came, introducing cultural features such as the outrigger canoe. The Lapita people, progenitors of the Polynesians, came from the Bismarck Archipelago with their distinctive pottery between 1,200 and 800 BC.

The first European to explore the islands was the Spanish sailor lvaro de Mendaa de Neira, who arrived in 1568 from Peru. Prior to the advent of the Europeans, the inhabitants of the Solomon Islands were renowned for headhunting and cannibalism. In the mid-nineteenth century, missionaries started to visit the Solomon Islands. They made little headway at first because “blackbirding” (the sometimes violent recruitment of workers for Queensland and Fiji sugar plantations) resulted in a series of reprisals and murders. In June 1893, the United Kingdom declared a protectorate over the southern Solomons due to the horrors of the labor trade.

During WWII, the Solomon Islands campaign of 1942–45, particularly the Battle of Guadalcanal, saw intense combat between Americans and Japanese. In 1976, self-government was established, followed by independence two years later. The Solomon Islands is a constitutional monarchy ruled by the Queen of the Solomon Islands, currently Elizabeth II.

Ethnic unrest, government misbehavior, and criminality threatened stability and civilization in 1998. The Regional Assistance Mission to Solomon Islands (RAMSI), headed by Australia, arrived in June 2003 and restored peace, disbanded ethnic militias, and strengthened civil administration. It also resulted in the construction of facilities for expatriate employees.

By plane Henderson International Airport is located 7 miles east of Honiara, the capital. Most days, scheduled flights leave from Brisbane, Australia. Flights are also available between Vanuatu, Fiji, and New Guinea. By sea Honiara is sometimes visited by cruise ships. It is also feasible to go by boat from southern Bougainville in...

Auki Ferry This service operates most days from Honiara Wharf to Auki on the island of Malaita, which is located across the Slot from Honiara. In 2012, the one-way ticket was S$300 and the return fare was S$580. The ferry passes through the Florida Islands channel, which is worth viewing,...

Everyone must have a passport, an onward ticket, and enough money to cover their stay in the Solomon Islands. Citizens of the following countries may get visitor visas on arrival:American Samoa, Andorra, Anguilla, Antigua and Barbuda, Argentina, Aruba, Australia, Austria, Bahamas, Barbados, Belize, Bonaire, Brazil, British Virgin Islands, Brunei, Canada,...

Islands in Solomon Islands Choiseulthe northernmost region, which comprises the Treasury Islands, Shortland Islands, and Choiseul itself Florida and Russell Islands Guadalcanal (Honiara)the main island, which contains the capital city and the primary airport New Georgia IslandsNew Georgia, as well as a slew of small islands and atolls Malaita Rennell and Bellona MakiraPreviously, this island was known...

In Honiara, ATMs are accessible. Some hotels and resorts accept Australian currency. The majority of the population relies on agriculture, fishing, and forestry for a portion of their income. The vast majority of manufactured items and petroleum products must be imported. Undeveloped mineral resources such as lead, zinc, nickel, and...

In the Solomon Islands' traditional culture, age-old traditions are passed down from generation to generation, supposedly by the ancestor spirits themselves, to create the cultural values of the Solomon Islands. Media Due to linguistic difficulties, illiteracy, and the difficulty of getting television signals in certain areas of the nation, radio is...

Stay Safe in Solomon Islands The Solomon Islands are situated in the Pacific "Rim of Fire" and are prone to earthquakes, some of which are very big! An 8.1 magnitude earthquake near Ghizo Island (in the New Georgia Islands) in 2007 caused a tsunami up to 12 meters high, killing...