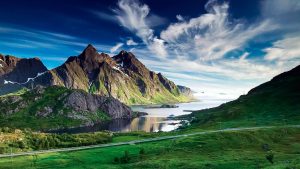 Australia and OceaniaSamoaHistory Of Samoa

Samoans first came in the Americas from Southeast Asia about 1500-1000 BC. Mulifanua on Upolu island is the earliest known site of human habitation during that time period.

By the end of the nineteenth century, Samoans had earned a reputation for being warlike, having fought battles with the British, Germans, and Americans who sought to utilize Samoa as a refueling station for coal-fired ships, whaling, and commodities. German companies monopolized copra and cocoa bean production on the island of ‘Upolu, while the United States established connections with local chieftains, mostly on the islands to the east, which were subsequently ceded to the United States as American Samoa and have not been given independence. Britain also sent soldiers to defend commercial interests. Germany, America, and the United Kingdom sent weapons and training to fighting Samoans, fueling tribal clashes. All three deployed warships into Apia port, but luckily for Samoa, a big storm in 1889 damaged or destroyed the vessels, thus ending the fight.

The Scottish novelist Robert Louis Stevenson, who traveled to the South Pacific for his health and lived in Samoa in the early 1890s, was a significant newcomer. His home in Upolu, Vailima, and his tomb on the hill above it, may both be visited. Stevenson was known as “Tusitala” (Teller of Tales), and his name is still remembered at one of Apia’s hotels.

On the island of Savai’i, an independence movement started in the early 1900s. By the late 1920s, the Mau a Pule had gained broad support across the nation. The colonial government subsequently prohibited supporters from wearing the Mau uniform, which was a navy blue lavalava with a white stripe. The New Zealand soldiers opened fire on a peaceful Mau march on December 28, 1929, killing 11 Samoans. When World War I broke out in 1914, New Zealand invaded the German protectorate of Western Samoa. It remained to govern the islands until 1962, when they became the first Polynesian country to re-establish independence in the twentieth century. In 1997, the nation deleted the word “Western” from its name, which differentiated it from American Samoa. On June 1st, it observes Independence Day.

To foster stronger relations with Samoa’s biggest trade partners, Australia and New Zealand, driving was moved from the right to the left side of the road in September 2009. It was the first nation in many years to swap sides, but its tiny size made things less chaotic. Then, in December 2011, Samoa swapped sides of the International Date Line, from east to west (UTC -11 to +13). The change was intended to assist companies with connections to New Zealand that only shared three working days each week (Monday in NZ was Sunday in Samoa & Friday in Samoa was Saturday in NZ).

By plane Fagalii airport is located just east of Apia (IATA: FGI). Polynesian Airlines uses this for flights from American Samoa. Typically, there are five or six flights each day. Faleolo International Airport (IATA: APW) is about a 45-minute drive from Apia. Even though many planes come at inconvenient hours, there...

Beach fales are a fun and affordable way to stay in Samoa. The Samoa Tourism Authority ([email protected]) has a list, but the best method to find out where to stay is to ask other visitors. Because Samoa is small and tourism is restricted, you will run into the same...

National Parks. Both Upolu and Savaii have numerous national parks. These include tropical foliage, a variety of birds, and several fascinating lakes. On Savaii, the Falealupo Rainforest Preserve offers a brief canopy walkway where you may sleep in the trees. On Upolu, Lake Lanoto'o National Park features a unique lake...

A Samoan Tattoo. This ancient art style is deeply ingrained in Samoan culture. There are various designs for men and women; for males, the tattoo may span half of the body. Be aware that the tattooing procedure may be very painful, but if you believe you can handle it, ask...

Food in Samoa Eating is a very essential aspect of Samoan life, as shown by the size of many Samoans. When they travel, they often bring food with them. Samoan cuisine is not heavily flavored or seasoned. It includes items that most Westerners are unfamiliar with, such as breadfruit, taro...

The Tala is the local currency. It is also known as WST, WS$, or SAT. It is unlawful to do business in a foreign currency under local legislation. It is very simple to exchange money. Monday through Friday, 9 a.m. to 17 a.m., and Saturday mornings, 9 a.m. to 17 a.m....

Samoa has a functional telephone system that includes international calling. Public phones in certain communities need a pre-paid phone card. The Internet service providers are Samoa.ws, ipasifika.net, and Lesamoa. In Apia, there are many public Internet access sites where you can get fast, reliable connection for about 12 tala (4...

Samoa is very religious, with the majority of the people belonging to the Anglican Church. This implies that Sunday is usually observed as a holy day, with the majority of stores and enterprises closed. On Sundays, you should not go for a stroll around the villages. At sunset, several communities...

The fa'a Samoa, or traditional Samoan way of life, continues to be a powerful influence in Samoan culture and politics. Despite centuries of European influence, Samoa has managed to preserve its ancient traditions, social and political institutions, and language. The Samoa 'ava ceremony, for example, is a major and...

Stay Safe in Samoa Samoa is usually regarded as a safe location. The crime rate is minimal, and the people are very helpful and kind. Items are sometimes stolen. However, with reasonable measures, the risk of this occurring should be low. In Apia, free roaming dogs may be a safety hazard....