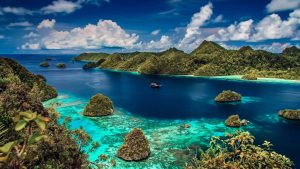 When it comes to travel, Papua New Guinea is a weird country. Because of the country’s tropical climate, harsh terrain, and lack of government capability, there are relatively few paved roadways.

There are no major highways connecting Port Moresby to anyplace else, with the exception of a short stretch of road connecting it to the local hinterland and a route that will allow you to follow the coast southeast for a few hours.

On the north coast, a shaky roadway connects Madang and Wewak only in principle.

The Highlands Highway, which starts in Lae (the country’s major port) and continues up into the highlands via Goroka to Mt. Hagen, with a branch heading down to the coast to Madang, is a notable exception. The road splits just outside Mt. Hagen, with the southern line continuing through the Southern Highlands to Tari and the northern line continuing through Enga province to Porgera.

The most frequent mode of transportation is via PMV/bus with locals.

A excellent roadway connects Lae, Madang, Goroka, Tari, and Mount Hagen. As a newbie, it is usually best to seek assistance from locals (e.g., hotel-staff). Most communities have a number of beginning locations. A journey from Lae to Madang costs around PGK20, while a trip to Mt. Hagen costs about PGK30.

Papua New Guinea has traditionally been one of the world’s aviation hotspots, and the country still offers some of the most magnificent flying in the world. Lae was the busiest airport in the world in the 1920s, and it was there that aviators in the gold mining business first demonstrated that it was economically viable to transport goods (rather than simply passengers) by air. In fact, Lae was the starting point for Amelia Earhart’s last flight.

Air travel is still the most frequent mode of transportation between large metropolitan areas; in fact, almost every significant town is constructed around an airfield. In fact, the former airstrip is Mt. Hagen’s major thoroughfare! Traveling from the coast into the Highlands is very beautiful (don’t take your gaze away from the window for a second!) and pilots from Australia, New Zealand, America, and other nations work here just for the thrill of flying. However, if you dislike tiny aircraft (or even smaller helicopters), traveling to more distant areas here may not be the greatest choice for you.

Local transportation in the archipelagos is provided by the ubiquitous banana boat, a 30-40 ft fibreglass hull with an outboard engine.

In addition, two or three shipping lines offer tickets for customers who wish to hop from one city to the next. These boats only operate twice or three times each week and provide higher and lower class seating. Upper will get you a bunk to sleep on, while lower will earn you a hard seat.

A ferry runs twice a week between Madang and Wewak.

Once a week, a small ship departs from Lae, stopping at Finschhafen and Umboi Island. Sleeping on the open deck of a ship as it slowly creeps through the South Pacific night is about as romantic as it sounds, but be warned: it gets chilly on the open ocean no matter where you are, so bring some warm clothing or rent an inside cabin.

South New Guinea The Kokoda Route is a 60-mile trail that starts in Port Moresby and leads up into the Owen Stanley Range. This route was originally used by gold miners in the 1890s and is best known as a World War II historical location where the Japanese attempted to...

There is evidence of human habitation in what is now Papua New Guinea dating back 35,000 years. This is from an ancient site near Namatanai in New Ireland province called Matenkupkum. Other archaeological investigations in New Ireland have unearthed artifacts and food remains going back 20,000 years. In more recent...