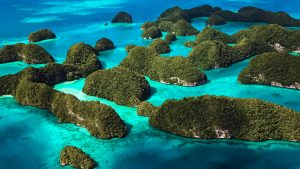 Australia and OceaniaPalauHistory Of Palau
September 5, 2021

Palau was first inhabited during the third and second millennia BC, most likely by people from the Philippines or Indonesia.

Until the 12th century, the islands were home to a population of short-statured Negrito or Pygmy people. According to the language, the current people may have originated in the Sunda Islands.

Sonsorol, part of the Southwest Islands, an island chain about 600 kilometers (370 miles) from Palau’s main island chain, was sighted by Europeans as early as 1522, when the Spanish mission of the Trinidad, the flagship of Ferdinand Magellan’s circumnavigation voyage, sighted two small islands around the 5th parallel north and named them “San Juan.”

Following the Spanish invasion of the Philippines in 1565, the archipelago of Palau became part of the territory of the Captaincy General of the Philippines, which was formed in 1574 as part of the Spanish East Indies, with the capital located in the colonial city of Manila. However, the Spanish presence did not begin to manifest itself until the end of the 17th century, with evangelization, and its domination started to take form in the 18th century.

Palau was formally discovered a century later, in 1697, when a party of Palauans were shipwrecked on the Philippine island of Samar to the northwest. On December 28, 1696, they were questioned by Czech missionary Paul Klein. Klein was able to create the first map of Palau based on the Palauans’ depiction of their home islands, which they created on the beach using an arrangement of 87 stones. In a letter written in June 1697, Klein presented his results to the Jesuit Superior General.

This map and letter sparked a lot of curiosity in the new islands. In 1705, Fr. Andrew Serrano wrote another letter to Europe, basically duplicating the information provided by Klein. The letters culminated in three failed Jesuit expeditions to Palau from the Spanish Philippines in 1700, 1708, and 1709. On November 30, 1710, a Jesuit expedition headed by Francisco Padilla explored the islands for the first time. The mission ended with the two priests, Jacques Du Beron and Joseph Cortyl, stranded on the shore of Sonsorol after the mother ship, the Santisima Trinidad, was pushed to Mindanao by a storm. In 1711, another ship was dispatched from Guam to rescue them, but it capsized, killing three more Jesuit priests. Due to the failure of these efforts, Palau was given the original Spanish name Islas Encantadas (Enchanted Islands). Despite these early setbacks, the Spanish Empire eventually came to control the islands.

In the 18th century, British merchants were major visitors to Palau, followed by increasing Spanish influence in the 19th century. Following its loss in the Spanish–American War, Spain surrendered Palau and the majority of the other Caroline Islands to the German Empire in 1899 under the German–Spanish Treaty (1899). After capturing the islands from Germany in 1914, the Japanese Empire seized them during World War I. Following World War I, the League of Nations officially assigned the islands to Japan as part of the South Pacific Mandate.

During WWII, the United States seized Palau from Japan in 1944, after the costly Battle of Peleliu, in which over 2,000 Americans and 10,000 Japanese were killed. The islands were officially transferred to the United States under UN auspices in 1947 as part of the Trust Territory of the Pacific Islands created by Security Council Resolution 21.

In 1979, four Trust Territory districts merged to create the Federated States of Micronesia, but the districts of Palau and the Marshall Islands refused to join. Palau, the Carolines’ westernmost cluster, instead chose independence in 1978. In 1981, it adopted a new constitution and became the Republic of Palau. In 1982, it signed a Free Association Compact with the United States. The Compact was approved in 1993 after eight referendums and a change to the Palauan constitution. The Compact entered into force on 1 October 1994, making Palau de jure independent, though it has been de facto autonomous since the trusteeship expired on 25 May 1994.

The Senate approved legislation designating Palau as a “offshore” financial hub in 1998. Palau enacted its first bank regulation and anti-money laundering legislation in 2001.

By planeThe only viable option is to fly. On Babeldaob, there is just one airport, Airai (ROR).Visitors may fly to Guam on United Airlines' daily flights ($600), which link to Japan and the United States, as well as straight to Manila, Philippines.Delta Air Lines began daily service to (ROR)...

A taxi and a leased vehicle were used. There are many local taxis. If you hire a vehicle, plan on driving carefully on some rough roads. Palau has both left and right hand drive vehicles, which may create some difficulty. Please keep in mind that the facility beyond Ice...

Regions in PalauBabeldaob(Melekeok)the biggest island, with a population of about 6,000 people, as well as Babelthuap, Babelthwap, Babeldoub, Babeldaub, and othersKororthe location of the biggest city of the same nameRock IslandsJellyfish Lake, a lake containing millions of jellyfish with relatively mild stingers where snorkelers may safely swim, is made...

BudgetPalau has a variety of guest house-style boutique lodging options. Some are near or inside Koror, while others are not. These may be booked internationally via diving shops that provide vacation packages (such as Sam's Tours). Prices start at $50 per night and go higher from there.Guest Lodge Motel (Free...

Things To See in Palau

Palau has all you might want in a South Pacific island state: beautiful tropical serenity. The majority of the tourist attractions are located on or around The Rock Islands or Chelbachebover. These 250 rock islands, many of which are small and deserted, provide some breathtaking vistas and are a...

Things To Do in Palau

Palau is well known for its scuba diving. Blue Corner, one of the most renowned diving locations with continuous sharks and a strong current, is less than an hour's boat trip from most resorts. Many live aboards, such as Ocean Hunter, operate from Palau. Tours of WWII battlegrounds are...

Palau's currency is the US dollar.CostsPrices are relatively expensive, as one would anticipate on an isolated island where tourism is the primary business, and even a low-end daily budget would be about US$100/day.ShoppingTraditional wood carvings portraying Palauan tales and legends are known as Palauan storyboards.

Food in PalauAlmost everything. Palau has a significant community of people from Taiwan, the Philippines, Korea, Japan, and the United States, and local businesses have developed to meet their requirements. So Koror provides an incredible variety of goods in its shops, although at a cost. Bentolunch boxes with a Japanese...

Stay Safe in PalauPalau is a relatively safe place to visit. Even after midnight, it is safe to walk about downtown Koror. But, like in every other part of the globe today, common sense wins. Pedestrians should exercise caution since sidewalks are few even in downtown Koror.Stay Healthy in...