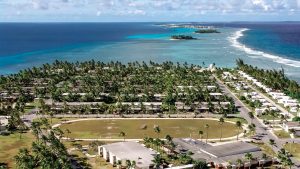 How To Travel To Marshall Islands

How To Travel Around Marshall Islands

The Marshall Islands are made up of 29 atolls and five isolated islands, 24 of which are inhabited. They are divided into two island chains:

How To Travel To Marshall Islands

How To Travel Around Marshall Islands

By planeAir Marshall Islands operates flights between the islands. However, the business is plagued by financial and technical issues, and one or both of the fleet's two aircraft are often grounded for days, weeks, or months at a time.By BoatShip transportation is also possible. Field trip ships sail across...

Everyone is needed to have a current passport.The United States and all of its territories, the Federated States of Micronesia, the Republic of Palau, and Pacific Islands Forum countries such as Australia and New Zealand are free from entrance visa requirements.Citizens of Japan, Korea, the Republic of China (ROC),...

The National Telecommunications Authority provides mobile phone service. Visitors who have a foreign SIM card may get an SMS with a local number to use with their foreign SIM card. To activate the service, just top up your account. Follow the steps outlined in the SMS. It may take...

Things To See in Marshall Islands

The Marshall Islands' allure is not found in a plethora of attractions. This tiny nation, with a population of fewer than 70,000 people and 1,156 islands and islets, is, nevertheless, very distinctive. Expect nothing remarkable, but appreciate the unspoiled beauty of picture-perfect tropical islands, excellent scuba diving and windsurfing...

There are many different kinds of fruits available throughout the year. Farms that grow vegetables or rear pigs are also available. Breadfruit, pandanus, coconut, maize, tomato, sweet potato, cassava, papaya, pumpkin, "nin" (noni), lime, pigs, and fowl make up the majority, if not all, of the produce. Along the...

The Marshallese culture is defined by pre-Western interaction and the subsequent effect of that contact on its people. The Marshall Islands were geographically remote. The inhabitants became expert navigators, able to travel to neighboring atolls using the currents. Prior to close interaction with Westerners, infants were nude, and men...

The Marshall Islands were inhabited by Micronesians in the second millennium BC, although there are no historical or oral documents from that time period. The Marshall Islanders learnt to navigate vast ocean distances by canoe using traditional stick charts over time.Spanish colonyIn 1526, Spanish adventurer Alonso de Salazar, commanding...