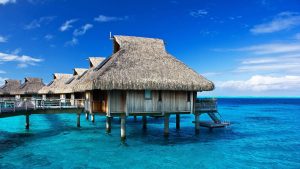 Australia and OceaniaFijiFood & Drinks in Fiji

Residents eat in the cafés and small restaurants that can be found in every town. The food is healthy, cheap and of varying quality. What you order from the menu is often better than what comes out of the glass window, except in places that sell a lot of food quickly and keep it fresh. Fish and chips are usually a safe bet and are widely available. Many cafés serve Chinese dishes of one kind or another, but also Indian and sometimes Fijian-style fish, lamb or pork dishes. Near the airport, there is a wider choice of dishes, including Japanese and Korean.

Local delicacies include fresh tropical fruits (found in season at the farmers’ market in every town), paulsami (taro leaves baked and marinated in lemon juice and coconut milk, often with a meat or fish filling and a little onion or garlic), kokoda (fish or other seafood marinated in lemon and coconut milk) and anything cooked in a lovo or deck oven. Vutu is a local type of nut, grown mainly on Beqa Island, but also available in Suva and other towns around January and February. Much of the food is cooked in coconut milk. Note that everyone reacts differently to the increased fat content in their diet.

Be careful when ordering chicken dishes. Very often the chicken is cut in one bite, but with all the bones left over, it is quite easy to choke on a sharp bone. If in doubt, always ask for boneless chicken meal.

A typical Fijian meal consists of a starchy food, side dishes and a drink. The most common starchy foods in Fijian meals are taro, sweet potato or cassava, but breadfruit, bananas and nuts can also be found. Relishes include meat, fish, seafood and vegetables. Drinks include coconut milk, but water is most commonly drunk.

A very popular drink in Fiji is yaqona (“yang-go-na”), also known as “kava” and sometimes called “grog” by the locals. Kava is a peppery and earthy tasting drink made from the root of the pepper plant (Piper Methysticum). Effects include a numb tongue and lips (usually only for about 5-10 minutes) and relaxed muscles. Kava is mildly intoxicating, especially when taken in large or regular quantities, and taxi drivers and others who have used it recently should be avoided.

Kava consumption in Fiji became popular during the decline of cannibalism and was originally intended as a means of resolving conflicts and facilitating peaceful negotiations between villages. It should not be consumed at the same time as alcohol.

The climate in Fiji is tropical and warm all year round with minimal extremes. Warm season in Fiji is between November and April while the cooler season is from May to October. Temperatures in the cold season are still an average of 22 ° C. Rainfall varies, with heavier rainfall...