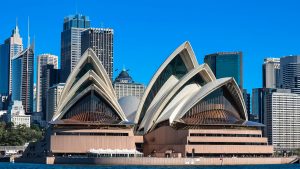 Australia and OceaniaAustraliaThings To See in Australia

Australia’s flora and fauna are unique to the island continent, the result of millions of years of isolation from the rest of the world. Australian animals include a large group of marsupials (pocket mammals) and monotremes (egg-laying mammals). The kangaroo (national symbol) and the koala are just a few of Australia’s animal icons. A visit to Australia would not be complete without the chance to see some of these animals in their natural environment.

For much of Australia’s modern history, the United Kingdom was a penal colony for condemned prisoners, and there are many historic sites that still commemorate the time when condemned prisoners were transported. Perhaps the most famous of these sites are Port Arthur in Tasmania and Fremantle Prison in Fremantle, near Perth, Western Australia. There are also many other sites scattered around the country.

Australia has many landmarks that are famous around the world. From Uluru, the Red Centre, to the Sydney Harbour Bridge and the Sydney Opera House.

Sport is an integral part of Australian culture, from the capital to the countryside. This is evidenced by the fact that despite its relatively small population, Australia is one of the top performing teams at the Olympic Games. Most of the games take place on weekends (Friday night to Monday night). Australian sports fans are generally well behaved and it is not uncommon for fans of two opposing teams to sit together during a match, even if the teams are bitter rivals. While cheering can get really passionate, actual crowd violence is extremely rare.