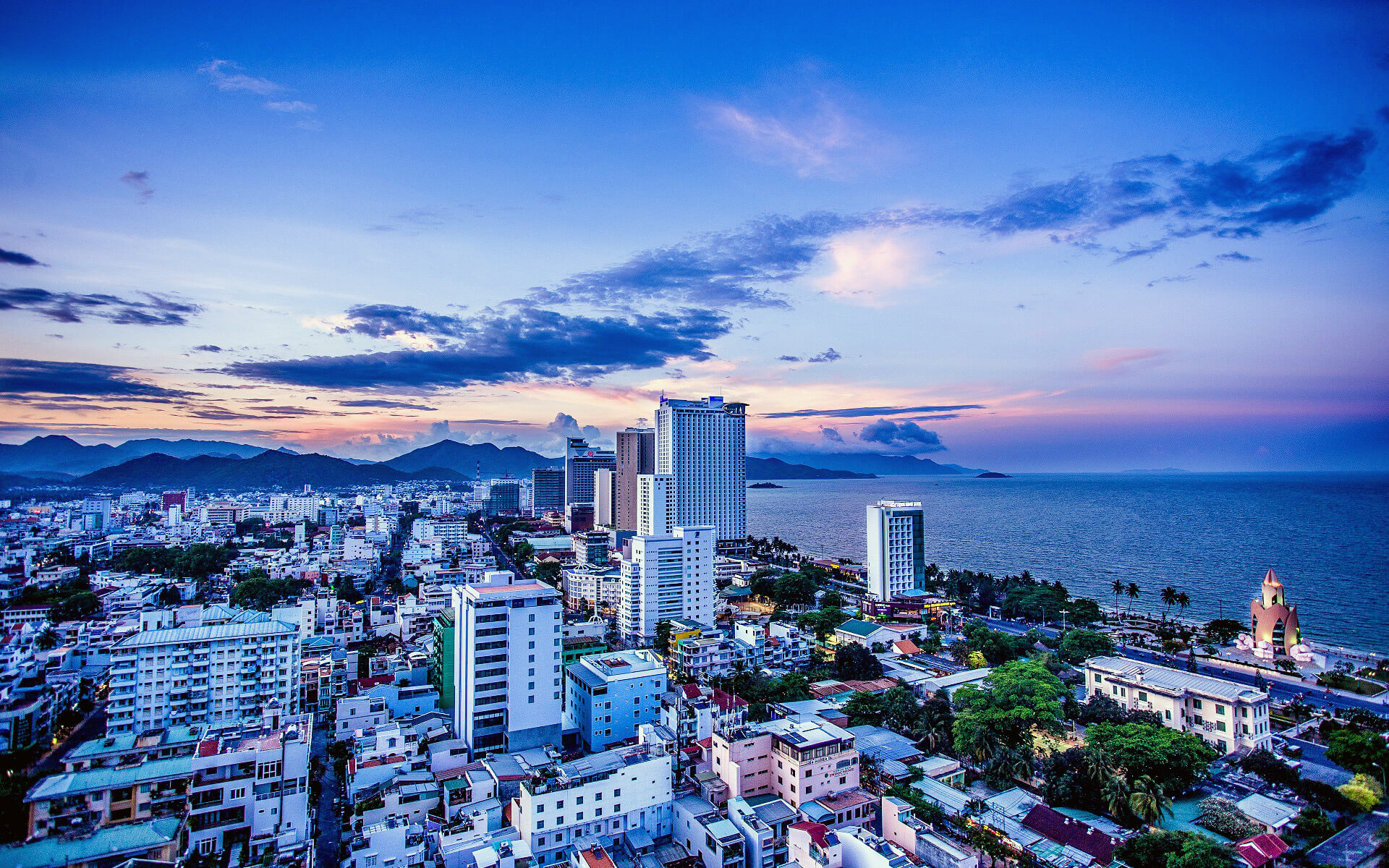 Nha Trang is a beach city and the seat of Khánh Ha Province on Vietnam’s South Central Coast. It is bordered to the north by Ninh Hoà district, to the south by Cam Ranh town, and to the west by Diên Khánh District. The city has a population of roughly 392,000 people, which is expected to grow to 560,000 by 2015 and 630,000 by 2025. Based on the consent of the Prime Minister of Vietnam in September 2012, an area of 12.87 square kilometers (4.97 square miles) of the western communes of Diên An and Diên Toàn is proposed to be incorporated into Nha Trang, making its new area 265.47 square kilometers (102.50 square miles).

Nha Trang is well known for its beaches and scuba diving and has developed into a popular international tourist destination, attracting large numbers of backpackers as well as more affluent travelers on the south-east Asia circuit; it is already very popular with Vietnamese tourists, with Nha Trang Bay widely regarded as one of the world’s most beautiful bays.

Historically, the Champa called the city Kauthara. The iconic Po Nagar Tower, erected by the Champa, may still be found in the city. Nha Trang, being a coastal city, has a marine scientific institute, the Nha Trang Oceanography Institute. The Hon Mun marine protected area was one of the world’s first four marine protected areas to be recognized by the IUCN.

Nha Trang is one of Vietnam’s most prominent tourist destinations, owing to its gorgeous beaches with fine, clean sand and clear ocean water with pleasant temperatures all year. There are various resorts and amusement and water parks in the city and on islands off the coast, including Vinpearl, Diamond Bay, and Ana Mandara. Tran Phu Street, which runs along the seashore and is frequently referred to as Vietnam’s Pacific Coast Highway, is perhaps the most picturesque street in Nha Trang.

Hon Tre Island (Bamboo Island) is located off the coast of Nha Trang and is home to a big resort run by the Vinpearl Group. The Vinpearl Cable Car, a gondola lift system, connects the mainland to Hon Tre Island’s five-star resort and amusement park.

Nha Trang serves as a stopover for yearly boat races that begin in Hong Kong. In recent years, the city has seen a surge in the number of five-star marine excursions. Aside from sailboat racing, Nha Trang offers a wide range of tourism activities to guests. Island hopping, scuba diving, water sports, and other recreational activities are available. The Nha Trang Tourist Information Center (a non-governmental organization) has been established to assist tourists with information. It is situated near the Cho Dam Market.

Fresh shellfish and grilled pork wrapped in rice paper are the most renowned dishes in the area. The region’s bird’s nest soup is regarded as among the finest in Vietnam. Bird nests are gathered in the wild, in bird farms on the coast’s islands, and even in some inner-city homes. The farmed bird in issue is a swiftlet, also known as yn hàng in Chinese (Aerodramus fuciphagus germani).

Long Sn Pagoda is notable for its Gautama Buddha statue.

Scuba diving, kite boarding, and catamaran sailboats are all accessible. The winds are consistent.

The nightlife is modest, however it sometimes extend until midnight around the Biet Thu tourist zone. As a result, the nightlife is regarded as better to those of neighboring seaside cities such as Mui Ne, Da Nang, and Vng Tàu. It is generally busiest during Vietnamese New Year, although it is worth visiting most of the year, with the probable exception of the rainy season (especially November). The Nha Trang River Cai boat ride is popular among visitors (locally known as Song Cai, as “song” means “river” in the Vietnamese language).

Nha Trang has a tropical savanna climate with a long dry season from January to August and a shorter wet season from September to December, when the north-east monsoon brings 1,029 millimetres (41 in) of the city’s total annual rainfall of 1,361 mm (54 in). During the rainy season, significant rainfall from typhoons is not unusual, albeit the city is protected from the worst winds.

Nha Trang city has a metropolitan area of 251 km2 with a population of around 500,000 people. It is bounded to the north by Ninh Ha, to the south by Cam Ranh, to the west by Diên Khánh, and to the east by the East Sea. The city is located on the picturesque Nha Trang Bay, which was named one of the world’s 29 most beautiful bays by Travel & Leisure in two consecutive years. Nha Trang is encircled by mountains on three sides and a big island on the fourth (in the ocean just in front of the city’s main region), preventing strong storms from harming the city.

The economy of Nha Trang is heavily reliant on tourism. The shipbuilding industry has grown and contributed greatly to the local economy in the city’s outskirts. Fisheries and services are also vital to the city’s economy. Khánh Ha Province in general, and Nha Trang in particular, contribute significantly to Vietnam’s yearly budget income. Lobster farming on the sea is a significant business for individuals living in the suburbs.

Several industrial parks are being built to the south of the city, near Cam Ranh Bay, and are partially open to investors. Once the deep-water port on Van Phong Bay is finished, this region will become the province’s third most important economic zone (besides Nha Trang and Cam Ranh).

Many hotels have Internet connectivity. There aren’t many Internet cafés around nowadays since most hotels provide laptops or Wi-Fi that visitors may use for free.

When calling a hotel, always sure to verify their pricing. Skype and Google Hangouts are both free or low-cost options.

Mobile SIM cards are widely accessible, with Mobifone seeming to be the best alternative for travelers. Their SIM cards cost 50,000 dong or somewhat more depending on where you purchase them, and they come with around 100,000 dong in credit for the first month. They also provide 3G Internet data bundles, such as 1.5 Gb for 120,000 dong per month. Information about Cellular Data: m-wap is an APN. mms is the username. mms is the password.