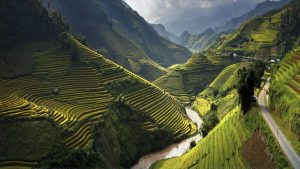 Landline numbers in Hanoi and HCMC have an eight-digit sequence, others have seven digits.

As hotels and guesthouses often charge higher fees for telephone calls, try to find a post office or other reliable public service.

Mobile phone numbers in Vietnam must always have 9 or 10 digits (including a “0” which precedes the “1nn” or “9nn” in Vietnam), regardless of where they are called from. The 1nn or 9nn is a mobile prefix, not an “area code” in the strict sense, and the second and sometimes third digits (the nn part) indicate the mobile network originally assigned. Like most mobile numbers, they can also be called in international format inside or outside Vietnam.

There are many mobile phone networks with different prefixes:

A quick Google search for relevant programmes should help you get around the ban relatively easily. It has also been reported that telecom companies are blocking the use of Skype, although the ban seems to have been lifted again. Other sites such as Gmail, YouTube and Wikipedia are not affected. If web censorship is an issue, try the Tor browser.

In traditional Vietnamese culture, elders are treated with great deference and respect. Although expectations are more relaxed when dealing with strangers, it is a good idea to be polite, respectful and reserved towards those who look older than you. In some regions, it is common for residents to fortify it,...