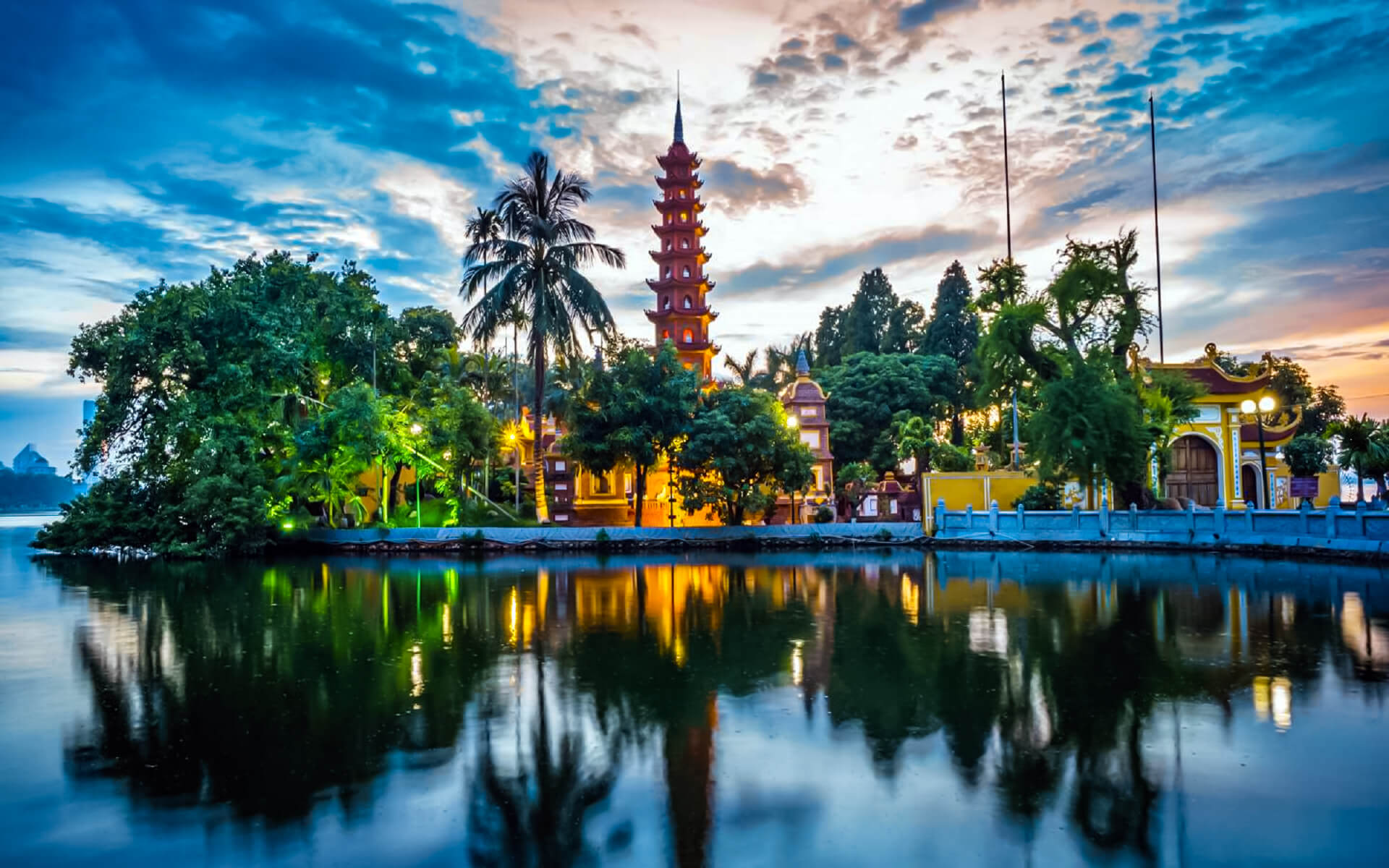 Hanoi is Vietnam’s capital and the country’s second biggest city. In 2015, the population was expected to be 7.7 million people.

The city is located on the Red River’s right bank. Hanoi is 1,760 kilometers (1,090 miles) north of Ho Chi Minh City and 120 kilometers (75 miles) west of Hai Phong. In October of 2010, the city celebrated its 1000th anniversary. The Hanoi Ceramic Mosaic Artwork is a 4 kilometer ceramic mosaic mural built to commemorate the event.

Hanoi is an enthralling fusion of East and West, with Chinese influence from centuries of rule and French je ne sais quoi from its colonial history. It remained mostly unspoilt by contemporary architecture in the 1970s and 1980s, and it is currently experiencing a fast makeover that has elevated it to the ranks of Southeast Asia’s rising stars.

Invading forces from all directions agree: Hanoi is an excellent capital. It has kept that status for almost a thousand years, surviving invasions, occupations, restorations, and name changes.

Hanoi is a beautiful city that has been nicknamed the “Paris of the East.” Hanoi is a popular tourist destination, with its tree-lined boulevards, more than a dozen lakes, and hundreds of French colonial-era structures.

In Hanoi, there is a wide range of entertainment alternatives available. Modern and traditional theaters, cinemas, karaoke bars, dance clubs, bowling lanes, and a plethora of shopping choices offer entertainment for both residents and visitors.

In recent years, the number of art galleries showing Vietnamese art has skyrocketed, with galleries such as Huynh Thong Nhat’s “Nhat Huy” joining the ranks.

Many contemporary retail facilities and megamalls have arisen in Hanoi as a result of the city’s fast economic expansion and extraordinarily high population density.

Hanoi, Vietnam’s capital for almost a thousand years, is regarded as one of the country’s most important cultural centers, where most Vietnamese dynasties have left their impression. Even if some treasures were destroyed by wars and time, the city still possesses many intriguing cultural and historic landmarks for tourists and locals to enjoy. Even when the Nguyn Dynasty transferred the nation’s capital to Hu in 1802, the city of Hanoi thrived, particularly after the French acquired control in 1888 and shaped the city’s architecture to their preferences, giving a significant aesthetic to the city’s rich cultural legacy. The city contains more cultural sites than any other city in Vietnam, and it has more than 1,000 years of history, the majority of which has been successfully conserved.

The Old Quarter, located near Hoàn Kim Lake, retains the ancient street layout and architecture of Hanoi. The city had just roughly 36 streets before the turn of the twentieth century, the majority of which are now part of the historic quarter. Each street included merchants and homes who specialized in a certain trade, such as silk or jewelry. These specialisation are still reflected in street names today, however few of them continue solely in their original business. The neighborhood is well-known for its tiny artists and merchants, including several silk stores. Local food specialities, as well as a number of clubs and pubs, may also be found here. Every Friday, Saturday, and Sunday evening, a night market (near ng Xuân Market) in the center of the neighborhood opens for business, selling a range of apparel, souvenirs, and food.

Other notable sites include the Temple of Literature (Văn Miu), the location of Vietnam’s first university in 1010, the One Pillar Pagoda (Chùa Mt Ct), and the Hanoi Flag Tower (Ct c Hà Ni). A large portion of the 900-year-old Hanoi Citadel was uncovered in downtown Hanoi, at the site of Ba nh Square, in 2004.

Hanoi, a city between rivers constructed on low soil, has several attractive lakes and is frequently referred to as the “city of lakes.” The most well-known of its lakes are Hoàn Kim Lake, West Lake, and Bay Mau Lake (inside Thongnhat Park). Hoan Kiem Lake, also known as Sword Lake, is Hanoi’s historical and cultural hub, and it is associated with the tale of the magical sword. West Lake (H Tây) is a famous tourist destination. It is Hanoi’s biggest lake, and it is surrounded by several temples. In the summer, the lakeside route in the Nghi Tam – Quang Ba region is ideal for biking, running, and seeing the metropolis, as well as enjoying lotus ponds. The finest way to experience the spectacular majesty of a Westlake sunset is from one of the lake’s numerous bars, particularly the Sofitel Plaza rooftop bar.

Hanoi has a warm humid subtropical climate with plenty of rain.

The city has a typical northern Vietnamese climate, with four distinct seasons.

Summer, which lasts from May through August, is characterized by hot, humid weather with plenty of rain.

Fall lasts from September through October, and it is distinguished by a reduction in temperature and precipitation.

By national standards, the winter months of November through January are dry and chilly.

In the winter, the city is often overcast and foggy, with just 1.5 hours of sunlight per day in February.

Hanoi receives an average of 1,680 millimetres (66.1 in) of rain each year, with the bulk falling between May and September. Rain falls on 114 days each year on average.

The average annual temperature is 23.6 degrees Celsius (74 degrees Fahrenheit), with a relative humidity of 79 percent.

Hanoi is located in northern Vietnam, in the Red River delta, about 90 kilometers (56 miles) from the coast. Hanoi has three primary types of terrain: the delta region, the midland area, and the mountainous zone. In general, the landscape descends gradually from north to south and west to east, with typical elevations ranging from 5 to 20 meters above sea level. The city’s hills and hilly zones are found in the north and west. The highest peak in the area is 1281 meters high at Ba Vi, which is situated in the western section of the region.

Among Vietnam’s cities, Hanoi has the highest Human Development Index. According to a recent PricewaterhouseCoopers rating, Hanoi will be the world’s fastest expanding metropolis in terms of GDP growth from 2008 to 2025.

Since the 1990s, the city’s industrial output has grown rapidly, with average annual growth rates of 19.1 percent from 1991 to 1995, 15.9 percent from 1996 to 2000, and 20.9 percent from 2001 to 2003. In addition to the eight current industrial parks, Hanoi is constructing five additional large-scale industrial parks as well as 16 small and medium-sized industrial clusters. The non-state economic sector is rapidly increasing, with over 48,000 enterprises functioning under the Enterprise Law (as of 3/2007).

The economic structure has also changed significantly, with tourism, finance, and banking now playing a larger role. The historic commercial areas of Hanoi include Hoàn Kim, ng a District, and the neighborhood, as well as the recently emerging Cu Giy and T Liêm in the western section.

Along with economic prosperity, Hanoi’s look has altered dramatically, particularly in recent years. With new highways and an enhanced public transportation system, infrastructure is continually being renovated.

There are several Internet cafés located across the city. The majority are utilized by Vietnamese teenagers who participate in online dancing or fighting games. Rates vary, but they might be as cheap as 3,000 dong per hour. Some of the finer cafés, notably in the Old Quarter, contain computers that can make international phone calls using Skype. Desktop computers are generally available at Internet cafés that charge a fee to use the Internet. There are many cafés with free wifi internet. All you have to do is purchase anything from their menus and stay as long as you like to enjoy their Wi-Fi. Wi-Fi cafés are clustered around Hoan Kiem Lake.