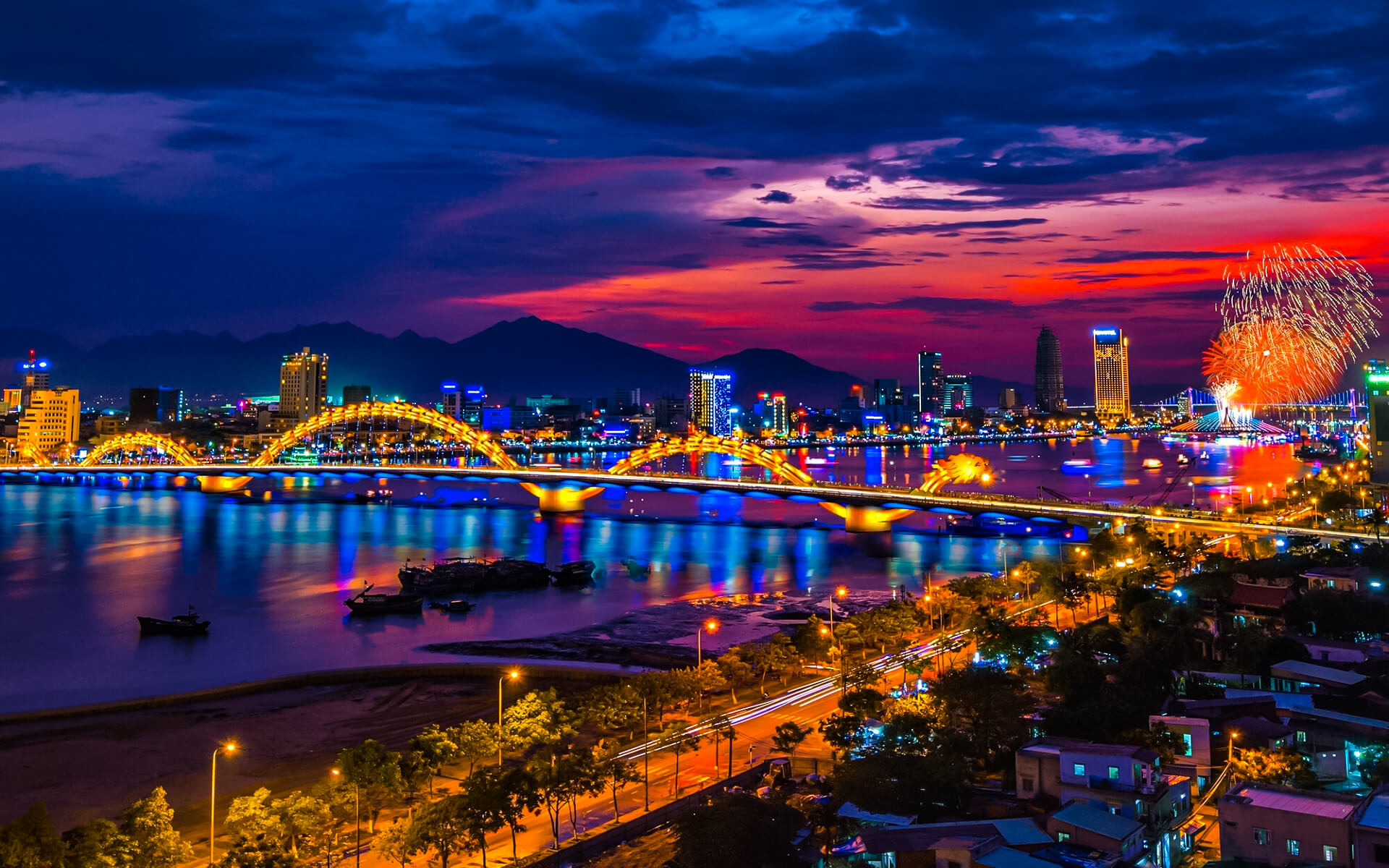 Da Nang is the fourth or fifth biggest city in Vietnam, located on the South China Sea coast halfway between Hanoi and Ho Chi Minh City, and is the largest city in Central Vietnam.

The city itself lacks the ambiance of Hanoi and the hustle and bustle of Ho Chi Minh City, but it has its share of sights and is close to the charms of Hoi An and the imperial capital of Hue, making it a popular vacation spot for those looking to explore the attractions of central Vietnam or soak up some sun on the city’s beaches.

The tourist industry is an important part of Da Nang’s economy. Its role as a transportation center for Central Vietnam, as well as its closeness to many UNESCO World Heritage Sites, including as the Imperial City of Hu, the Old Town of Hi An, and the M Sn ruins, drive most of its tourism activity.

Mỹ Sơn is a Quang Nam archaeological site that dates back over a thousand years. This historic capital and religious hub of the Champa monarchy, located in a lonely wooded valley about 70 kilometers west of Đà Nẵng, formerly had more than 70 style temples and stupas. Despite being severely damaged by bombing strikes in the 1960s, the site still contains around 20 buildings and was designated a UNESCO World Heritage Site in 1999. Many of the statues, sculptures, and reliefs found from M Sn are housed at the Museum of Cham Sculpture, which is located near the Hán River in the center of Đà Nẵng. The sensuous artwork on these pieces, which date from the fourth to the fourteenth century, illustrates everyday activities as well as Hindu and Buddhist religious topics.

The Marble Mountains are rugged limestone rocks that protrude from the coastline south of Đà Nẵng. Paths lead to the top of the wooded cliffs, where you can see Non Nuoc Beach and the South China Sea. The Cham people initially lived in the caverns tucked amid the rocks. The Nguyn Dynasty afterwards constructed several pagodas within the caverns. At its foot, Nước Village, the Marble Mountains are home to a variety of craftsmen who create sculpture and artwork. Non Nuoc Beach is a white sandy beach on the outskirts of Đà Nẵng that is famous for both its magnificent beauty and its history as a rest and relaxation destination for American soldiers during the Vietnam War, when it was known as “China Beach.” Today, the beach, as well as My Khê beach to the north, are home to high-end resorts, surfing, and entertainment facilities. Bà Nà Hills is a mountain resort featuring a 5-kilometer-long cable car system that transports visitors to Bà Nà’s top at 1487 meters above sea level. Sn Trà Mountain, only a few kilometers outside of town, with several natural streams and resorts along the coastline.

Đà Nẵng has a tropical monsoon climate with two seasons: a typhoon and rainy season from September to March and a dry season from April to August. Temperatures are frequently high, averaging 25.9 °C (78.6 °F) every year. Temperatures are greatest from June to August (with daily highs averaging 33 to 34 °C (91 to 93 °F)) and lowest from December to February (highs average 24 to 25 °C (75 to 77 °F)). The yearly average humidity is 81 percent, with highs reaching 84 percent between October and December and lows reaching 76–77 percent between June and July.

Đà Nẵng is the biggest city in central Vietnam and one of the most significant ports in the nation. Đà Nẵng is surrounded by mountains on one side and the South China Sea on the other. It borders Tha Thiên–Hu Province to the north through the Hi Vân Pass, Qung Nam Province to the south and west, and the ocean to the east. It is located 759 kilometers (472 miles) south of Hanoi and 960 kilometers (600 miles) north of Ho Chi Minh City.

Đà Nẵng is geologically located along the fringe of the Truong Son Orogenic Zone, a Paleozoic fold belt whose primary deformation occurred during the early Carboniferous epoch. The rugged Annamite mountain range to the north and north-west, with peaks varying in height from 700 to 1,500 metres (2,300 to 4,900 ft), and low-lying coastal plains with some salting to the south and east, with various white sand beaches along the coast, dominate the landscape of Đà Nẵng.

Đà Nẵng is the most important industrial hub in central Vietnam. In 2007, its GDP per capita was 19 million VND, making it one of Vietnam’s highest (after Ho Chi Minh City, Hanoi, Bình Dương Province, and ng Nai Province). By 2009, this figure had risen to 27.3 million VND.

There are several Internet cafes dotted around Da Nang that will you a nominal amount for an hour of web, e-mail, or anything you want usage of. You’ll recognize them by their computer-lined walls. Online gaming is enormous (and contentious) in Vietnam, and you’ll often find these establishments filled with adolescents playing online games together, particularly after school and into the evening. Some stores will have printers, while others may not; if you have a thumb drive, you can always load it with what you need to print and take it to a print shop.

If you’re looking for a quiet location to relax and check your email, you may be better off visiting a local coffee shop; most of them provide free Wi-Fi and are rather quiet outside of peak hours (early mornings and lunchtime).

A post office branch is conveniently located on Bach Dang Road, just opposite to the Han River Bridge. There are also large branches in each of Da Nang’s districts, so you may mail a letter or postcard from wherever you go.