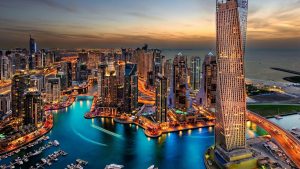 Emirati culture is based on Arab culture and has been influenced by the cultures of Persia, India and East Africa. Arabic and Persian-inspired architecture is part of the expression of the Emirates’ local identity. The influence of Persia on Emirati culture can be felt in the Emirates’ traditional architecture and folk art. For example, the distinctive wind tower that tops traditional Emirati buildings, the barjeel, has become a signature feature of Emirati architecture and is attributed to Persian influence. This influence stems both from traders fleeing the tax regime in Persia in the early 19th century and from Emirati ownership of ports on the Persian coast, for example the port of Al Qassimi in Lingeh.

The United Arab Emirates has a diverse society. The most important holidays in Dubai are Eid al Fitr, which marks the end of Ramadan, and National Day (2 December), which marks the founding of the United Arab Emirates. Emirati men prefer to wear a kandura, a long white tunic with long ankles woven from wool or cotton, and Emirati women wear an abaya, a black tracksuit that covers most parts of the body.

Ancient Emirati poetry was strongly influenced by the 8th century Arab scholar Al Khalil bin Ahmed. The oldest known poet in the UAE is Ibn Majid, born between 1432 and 1437 in Ras Al-Khaimah. The best known Emirati writers are Mubarak Al Oqaili (1880-1954), Salem bin Ali al Owais (1887-1959) and Ahmed bin Sulayem (1905-1976). Three other poets of Sharjah, known as the Hirah group, were strongly influenced by the poets of Apollo and the Romantic poets. The Sharjah International Book Fair is the oldest and most important book fair in the country.

The list of museums in the United Arab Emirates includes some regionally renowned museums, the most famous of which is that of Sharjah, whose Heritage District includes 17 museums and which was the Cultural Capital of the Arab World in 1998. In Dubai, the Al Quoz district has attracted a number of art galleries as well as museums such as the private Salsali Museum. Abu Dhabi has created a cultural district on Saadiyat Island. Six major projects are planned, including the Guggenheim Abu Dhabi and the Louvre Abu Dhabi. Dubai is also planning to build an Kunsthal Museum and a district for galleries and artists.

Emirati culture is part of the culture of eastern Arabia. The Liwa is a type of music and dance performed mainly in communities with descendants of Bantu people from the African Great Lakes region. The Dubai Desert Rock Festival is another important festival featuring heavy metal and rock artists. Cinema in the UAE is minimal but growing.