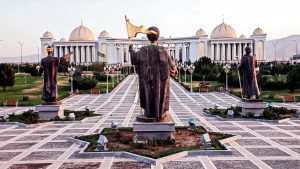 While the provinces are a useful method to divide vast Turkmenistan into regional travel regions, keep in mind that one geographical region dominates them all—the harsh desert wasteland known as the Karakum.

Ahal Province
The country’s center area, which includes the capital.

Balkan Province
The western province of the Caspian Basin.

Dashoguz Province
The ancient city of Konye-Urgench is located in northern Turkmenistan.

Other destinations in Turkmenistan