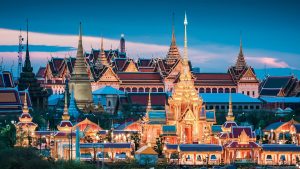 Thai culture has been shaped by many influences, including Indian, Lao, Burmese, Cambodian and Chinese.

Its traditions include great influences from India, China, Cambodia and the rest of Southeast Asia. Thailand’s national religion, Theravada Buddhism, is at the heart of modern Thai identity. Thai Buddhism has evolved over time to include many regional beliefs drawn from Hinduism, animism and ancestor worship. The official Thai calendar is based on the Eastern version of the Buddhist Era (BE), which precedes the Gregorian (Western) calendar by 543 years. Thus, the year 2015 in Thailand corresponds to 2558 BE.

Several different ethnic groups, many of which are marginalised, populate Thailand. Some of these groups span Myanmar, Laos, Cambodia and Malaysia and have mediated between their traditional local culture, national Thailand and global cultural influences. Overseas Chinese are also an important part of Thai society, especially in and around Bangkok. Their successful integration into Thai society has enabled this group to occupy positions of economic and political power. Thai Chinese companies thrive within a larger network, the Bamboo Network, a network of overseas Chinese companies operating in Southeast Asian markets with common family and cultural ties.

The traditional Thai greeting, the wai, is usually offered first by the younger of the two people meeting, with the hands joined and the fingertips pointing upwards, while the head is tilted to touch the fingertips face to face, usually pronounced with the words “sawatdi khrap” for men and “sawatdi kha” for women. The elder may then respond in the same way. Status and social position, for example within the government, also influence who performs the wai first. For example, although one may be much older than a provincial governor, at a meeting it is usually the visitor who pays respect first. When children go to school, they are taught to wait for their parents to show respect. The wai is a sign of respect and reverence for another, similar to the namaste greeting in India and Nepal.

As in other Asian cultures, respect for the ancestors is an essential part of spiritual practice in Thailand. Thais have a strong sense of hospitality and generosity, but also a strong sense of social hierarchy. Seniority is highly valued in Thai culture. Traditionally, elders have the say in family decisions or ceremonies. Older siblings have duties towards younger siblings.

Taboos in Thailand include touching someone’s head or pointing with the feet, as the head is considered the most sacred and the foot the lowest part of the body.

Thai cuisine combines five basic flavours: sweet, hot, sour, bitter and salty. Common ingredients in Thai cuisine are garlic, chillies, lime juice, lemongrass, coriander, galangal, palm sugar and fish sauce (nam pla). The staple food in Thailand is rice, especially jasmine rice (also called “hom mali” rice), which is part of almost every meal. Thailand has long been the world’s largest exporter of rice, and Thais consume more than 100 kg of milled rice per person per year. More than 5,000 Thai rice varieties are stored in the rice gene bank of the International Rice Research Institute (IRRI) based in the Philippines. The King of Thailand is the official patron of IRRI.

In recent years, Thai society has been influenced by a widespread multilingual press and media. There are a few English newspapers and many Thai and Chinese newspapers in circulation. Most popular Thai magazines use English titles as a glamour-chic factor. Many large companies in Bangkok operate in English as well as other languages.

Thailand is the largest newspaper market in Southeast Asia, with an estimated circulation of more than 13 million copies per day in 2003. Even within the country, outside Bangkok, the media is thriving. According to the Public Relations Department of Thailand’s Media Yearbook 2003-2004, for example, there were 116 newspapers in the nineteen provinces of Isan, Thailand’s northeastern region, as well as radio, television and cable. Since then, another province, Bueng Kan, has been established, bringing the total to twenty provinces. In addition, a military coup on 22 May 2014 led to strict government restrictions on all media and forms of expression.

Thailand generally uses the metric system, but traditional units of measurement are used for land area, and imperial units of measurement are sometimes used for building materials such as timber and sanitation. Years are counted in B.E. (Buddhist era) in educational institutions, the civil service, government, and contracts and newspaper dates. In the banking sector and increasingly in industry and commerce, the uniform counting of Western years (Christian or common era) is common.