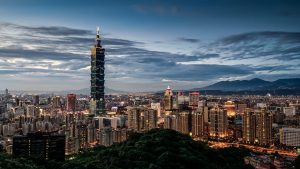 As part of immigration entrance processes, all foreigners (except those on official business and some permanent residents) aged 14 and above are electronically fingerprinted and photographed. If these steps are not followed, entry will be denied.

Foreign citizens from the 41 countries listed below may enter Taiwan visa-free as visitors as long as their passports are valid for at least 6 months at the time of entry.

Malaysia and Singapore are available for up to 30 days.

If nationals of the aforementioned countries show an emergency or temporary passport, they must apply for a landing visa on arrival by submitting a passport picture and paying a cost of NT$2,400.

Citizens of Japan must only show a passport valid for at least three months (rather than six months) while entering the country. Citizens of the United States may enter Taiwan with a passport that is less than 6 months old on the day of arrival if they provide a passport picture and pay a charge of US$184 or NT$5,600.

Citizens of Canada and the United Kingdom may remain for an additional 90 days (for a total stay of up to 180 days) at no cost.

Residents of Hong Kong and Macau with valid passports need apply for an entrance permit, which may be done on arrival or prior to departure if they were born in their respective territories or had previously visited Taiwan after 1983.

Citizens of India, Indonesia, the Philippines, Thailand, and Vietnam with a valid entrance visa or permanent residence card from a Schengen nation, Australia, Canada, Japan, New Zealand, the United Kingdom, or the United States may apply online for a 30-day Visa on Arrival.

Taiwan does not have official embassies in the majority of the world’s nations (due to mainland China’s ‘One China’ policy, which prohibits formal diplomatic ties with Taiwan). Instead, Taiwan maintains a “Taipei Representative Office” or something similar in most major countries, which serve as de facto embassies and consulates capable of issuing Taiwanese visas.

Taiwan and other East Asian countries share many cultural taboos/guidelines: When handing out or receiving business cards, always use two hands and a modest bend of the head. Receiving a business card with just one hand is very impolite.Some Taiwanese are superstitious about anything related to death, and unfortunate things...

Taiwanese culture is a hybrid mix of many sources, including aspects of traditional Chinese culture, owing to the historical and ancestral origins of the majority of its present inhabitants, Japanese culture, traditional Confucianist beliefs, and increasingly Western ideals. Following their relocation to Taiwan, the Kuomintang enforced an official version of...