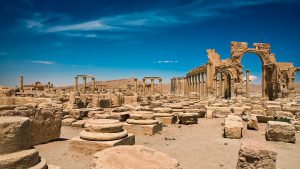 Syria has been engulfed in a political crisis since January 2011. Thousands of civilians have been murdered by armed insurgents, government security forces, and the military, and bombardment is mostly indiscriminate. In Syria, a growing military insurgency opposed to the Assad administration has carried out numerous high-profile assaults against government sites. As far as possible, avoid government buildings, protests, and armed troops.

All big gatherings should be avoided by travelers since they may become violent. Political organizations have targeted foreign visitors, particularly in the country’s south.

You may find yourself in hot water if you openly criticize the Syrian government or the president. To prevent any potential issues, you should avoid political discussions entirely. If you participate in political conversations with Syrians, be warned that if you are overheard, they may face rigorous interrogation by the secret police (mukhabarat). As a general rule, expect that you are being observed by plainclothes cops. You may note that there aren’t many uniformed police officers on the streets, but this is due to the police having a large network of plain clothes officers and informants.

Because begging is prevalent in certain areas of Syria, especially outside major tourist sites, mosques, and churches, beggars may sometimes demand money and may follow you about until you pay. Some have even been known to “attack” visitors in order to get money and food. It is recommended that you wear suitable Arab attire and attempt to fit in. It’s also a good idea to keep your money in your front pockets and keep it secure with you. Many beggar scams have also resulted in significant financial losses for many international visitors; be cautious of these scams.

The death sentence is imposed for drug trafficking or production.

Women traveling alone may find themselves attracting too much attention from Syrian males. However, this is usually confined to blank looks or weak efforts at communication. If it goes beyond that, the best course of action is to remain courteous while making it obvious that advances are not welcome. Bystanders may often be extremely chivalrous and helpful if you are vocal and engage them.

Women detained on suspicion of immoral behavior (for example, being alone in a room with a male who is not the woman’s spouse, or being in a home where drugs or alcohol are being used) may be submitted to a virginity test.

Most common illnesses, such as stomach infections and traveler’s diarrhea, are well-served by local pharmacies. Pharmacists often speak a little English. As of November 2007, you may request that your hotel summon a doctor if required, and a visit to your hotel room would cost between SYP700 and SYP1000.

Of course, the greatest therapy is to remain healthy in the first place. When dining out, choose a crowded restaurant.

Take your therapy with you if you have one. Don’t expect to locate all of your medications in Syria. If you must purchase anything from a drugstore, request a “foreign” EU or US brand. You will have to pay a premium for it, but you will have a better chance of receiving a genuine medication. According to several local pharmacists, certain products are of unknown origin and are useless.

By land Almost any national may get a visa at the border, regardless of whether it is written or suggested. However, do not purchase a bus ticket that will take you all the way to the other side of the border. They will always leave you there since it takes...

By taxi Taxis (often yellow and well marked) are a convenient method to travel about Damascus, Aleppo, and other cities. Most cab drivers do not speak English, therefore knowing Arabic would be beneficial. All legal taxis have meters, and it is essential to insist on the driver turning on the...

Regions in Syria Syria technically has 14 governorates. Northwestern SyriaAleppo, one of the world's oldest towns, as well as the Dead Cities, 700 abandoned villages in the country's northwest. HauranA volcanic plateau in southwest Syria that contains Damascus and its area of influence. Orontes ValleyThe Orontes Valley, which includes the cities of Hama...

Food in Syria Falafel, deep-fried chickpea patties, are priced between SYP15 and SYP30. Foul is another famous vegetarian dish. Don't be thrown off by the name. This fava bean paste, topped with cumin, paprika, and olive oil and served with flatbread, fresh mint, and onion, is not only delicious but...

In Syria, inflation is widespread, and any numbers stated in these guidelines without dates and/or in Syrian pounds should be regarded with caution. If you are under the age of 26, an international student card lowers entrance costs to numerous tourist attractions to 10% of the regular price. Depending on...

Syria offers simple and inexpensive internet connection. Internet cafés are extremely prevalent across cities. Although Facebook and YouTube have just been restored, certain websites, such as specific news sites, remain banned. The cafés are extremely welcoming, but to prevent getting overcharged, ask a local how much the internet costs...

Clothing Male and female tourists are usually permitted to dress as they would in their native countries. Contrary to popular belief, women are permitted to wear T-shirts and long-sleeved tops are not required until visiting a holy place. When visiting Muslim holy places, visitors should wear head coverings. To visit...

Ancient antiquity Since about 10,000 BC, Syria has been one of the Neolithic culture's (known as Pre-Pottery Neolithic A) hubs, when agriculture and cattle breeding first emerged in the globe. The succeeding Neolithic era (PPNB) is characterized by Mureybet culture's rectangular dwellings. People utilized stone, gyps, and burned lime containers...