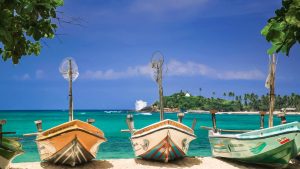 Sri Lanka has a continuous recorded history of over 2,500 years, as documented by the Mahawansha, and is referenced in many ancient Indian scriptures. One of the most famous is the Ramayana, in which the island, known as Lanka, was the island stronghold of King Ravana, who kidnapped Rama, an avatar of the Hindu God Vishnu. According to legend, Hanuman the monkey flew over to Lanka and set fire to the city, while Rama and his surviving soldiers subsequently crossed over from the mainland by constructing a land bridge across the sea.

There is a school of thinking, albeit it is mostly unsubstantiated, that Sita, Rama’s wife, eloped with Ravana while Rama was abroad. Those who accept this viewpoint believe that this is why Rama subjected Sita to a “agni pariksha” (fire test) to establish her purity. Nonetheless, supporters of Valmiki’s account of the event strongly oppose this idea.

The Sinhalese came in Sri Lanka in the late sixth century BC, most likely from northern India. Buddhism was introduced in the mid-3rd century BC, and towns like as Anuradhapura (kingdom from c. 200BCE to c. 1000CE) and Polonnaruwa grew into major civilizations (c. 1070 to 1200). Later noteworthy kingdoms include Dambadeniya, Yapahuwa, Gampola, Kandy, and Jaffna.

The island was occupied by the Portuguese in the 16th century and by the Dutch in the 17th century before being surrendered to the British in 1796 and becoming a crown colony in 1802. It gained independence as Ceylon in 1948, and its name was changed to Sri Lanka in 1972.