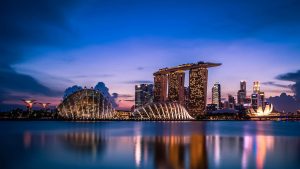 Singaporeans are unconcerned with formal etiquette. What is considered appropriate behavior at home, wherever that may be, is unlikely to upset anybody in Singapore. Women wearing exposing clothes or males wearing shorts and slippers are completely normal in Singapore, unlike most of Southeast Asia. However, upmarket bars and restaurants may have dress codes, and Singaporeans are more socially conservative than Westerners, so public displays of affection (holding hands is fine, but making out in public is considered impolite) and toplessness for women are not permitted anywhere, even on the beach. Most Buddhist and Hindu temples, as well as mosques, demand women to wear modestly, with no exposed shoulders or skirts longer than the knee-cap. Visitors will be able to cover themselves before visiting the main touristic temples using shawls and sarongs.

In the heartlands, people are usually friendlier, and it is not unusual to see merchants and customers of various ethnicities joking about. While Singaporeans are not unfriendly to foreigners, they are usually unresponsive to excessive politeness from them. Furthermore, although the local dialect may seem abrupt or even harsh due to its strong Chinese influences, stating “You want beer or not?” is actually more courteous in Chinese than asking whether you want beer; after all, the person asking the question is giving you a choice, not making a demand.

During rush hour, expect a lot of jostling and pushing on the MRT (even simply to alight) as everyone scrambles for an empty seat in a fairly organized fashion. Despite signs urging people to be a bit more polite, this is a typical sight on a daily basis. When trying to board trains during rush hours, gently nudge people to avoid getting left behind and having to wait for the next MRT train.

If you’re giving presents, keep an eye out for taboos. White flowers, as well as any items (food or otherwise) containing animals, should be avoided (usually reserved for funerals). Knives and clocks are also symbols of severing connections and death, respectively, and the number four is considered superstitious by the Chinese. It’s also worth noting that opening a present in front of the person who gave it to you is considered impolite in Singapore. Instead, wait until the individual has gone before opening it. Many Muslims and Hindus in Singapore refrain from drinking alcohol.

Swastikas may be seen in Buddhist and Hindu temples, as well as in Buddhist and Hindu goods. They are considered religious symbols and are not associated with Nazism or anti-Semitism. As a result, Western tourists should not be upset if they find a swastika in their hosts’ houses, and many locals will be perplexed. Nazi swastikas are sometimes used as fashion statements by those who are unaware of the philosophy.

When inviting Singaporean friends for a dinner, keep in mind their dietary limitations. Vegetarianism is practiced by many Indians and a few Chinese. Because most Malays are Muslims, they consume only halal cuisine, while most Hindus (and a few Chinese) avoid meat.

Immigration, politics, race/religion, LGBT rights, and Singaporean men’ National Service (1 year and 10 months plus annual reservist duties) are all sensitive topics in Singapore. These subjects should be avoided while conversing with locals, unless you are conversing with close friends. The subject of immigration, in particular, is especially delicate; remember that only 60% of Singapore’s population has Singaporean citizenship, with an even smaller percentage having been born and reared in the nation. While open xenophobia is uncommon in Singapore, many locals dislike foreign immigrants for, in their opinion, stealing the best positions, failing to integrate into society, failing to do National Service, and discriminating against Singaporeans.

Show up on time since Singaporeans are punctual. A strong handshake is the customary greeting. Conservative Muslims, on the other hand, should not touch the other sex, thus a man meeting a Malay woman should let her give her hand first, and a woman meeting a Malay man should wait for him to offer his. Simply follow their lead if they want to put their hand over their heart and bow gently instead. Singaporeans do not embrace strangers, and doing so would make your host uncomfortable, but the other person would be too polite to say anything since preserving face is a key Asian virtue.

A long-sleeved shirt and a tie are typical business dress for males, but the tie is frequently removed and the shirt’s collar buttoned instead. Jackets are seldom worn since the weather is usually excessively hot. The majority of women dress in Western work clothing, although a handful choose Malay-style kebaya and sarongs.

When individuals meet for the first time for business, they always exchange business cards: hold yours in both hands by the top corners, so the text faces the receiver, while simultaneously accepting theirs. (This seems to be more difficult than it is.) Study the cards you’ve been given and feel free to ask questions; when you’re done, put them on the table in front of you, not in your shirt pocket or wallet, and don’t write on them (some may find it disrespectful).

Bribery is frowned upon, thus business presents are usually frowned upon. Small conversation and bringing up the topic in an oblique manner are neither required or expected. The majority of meetings go right to the point.