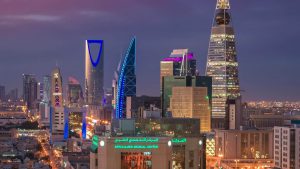 Entertainment in Saudi Arabia is very family-oriented. There are few activities for couples-only or singles. Single men are not allowed in family areas: family beaches are separate from bachelor beaches, for example. Women are expected to be accompanied by a male relative in public, although single women may be allowed in family areas.

Desert excursions are particularly popular with local Arabs. There are few desert dune-bashing tour operators, if any, but ATV rentals are often found on the roadside on the outskirts of major cities and expats often arrange convoy trips into the desert. The Empty Quarter has the most impressive scenery – and requires the most preparation.

Diving is very popular on the Red Sea coast in Saudi Arabia. There are a number of dive operators in Jeddah.

Amusement parks (many of them covered) are often located near shopping centres or beaches. Many large cities have public parks and small zoos. Horseback riding, camel rides, etc. are also offered at horse racing tracks and on some popular beaches. Many upscale hotels offer light activities (especially hotels located on beaches).

Cinemas are banned in the Kingdom, but DVD shops abound, although the selection is often tame and/or censored. DVDs in Saudi Arabia are invariably region 2, although bootleg DVDs (which are widely available in smaller video stores) are usually region-free and often uncensored. Satellite TV and downloading entertainment from the internet is therefore very popular.

Video games are an eternal obsession of Saudi youth, and one that local retailers exploit quite well. Video game shops are ubiquitous in all major cities. Authentic games are offered by most larger shops as US or European imports for an average of ~270SR (~$70), while the smaller shops usually only offer bootlegs (which are illegal but still lucrative enough that almost everyone sells them) at very low prices of 10-15SR ($2.5-$4). Wii and Xbox 360 bootlegs dominate, but some shops also offer Nintendo DS and PSP games that can be downloaded to the customer’s removable media on request.