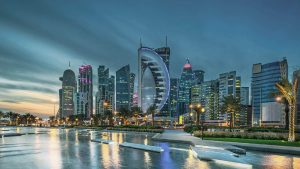 Qatar issues a 30-day visa on arrival at Doha Airport to nationals of the following countries: Andorra, Australia, Austria, Belgium, Brunei, Canada, Denmark, Finland, France, Germany, Greece, Iceland, Ireland, Italy, Japan, Liechtenstein, Luxembourg, Malaysia, Monaco, Netherlands, New Zealand, Norway, Poland, Portugal, San Marino, Singapore, South Korea, Spain, Sweden, Switzerland, USA and Vatican City. The price is QR 100 and payment by credit card is accepted. These visas can be extended once for 30 days (QR 100) at the airport immigration office, which is open 24 hours a day (in a building near the Oryx Rotana Hotel). edit. Overstaying a tourist visa is punishable by a fine of Rs. 200 per day.

For other nationalities, the visa process can be complicated as you need a guarantor on the Qatari side, be it a company or a government entity. Also, unlike those of most other countries, Qatari embassies do not have the authority to issue visas, so someone in Qatar will have to make the application for you.

Contrary to popular belief, Qatar allows entry for holders of Israeli passports (although you will need a visa in advance) and for holders of other passports that contain Israeli stamps and visas.

4 to 5 star hotels offer a full visa service for a fee if you book a room with them for the duration of your stay. Qatar Airways can also arrange a hotel and visa for you.

For stays longer than 30 days, the visa must be arranged with a sponsor, which can be a company, a government institution or possibly a hotel. Single women under the age of 35 will have difficulty obtaining a visa for a longer stay, as the government fears that they will stay in Qatar for prostitution.