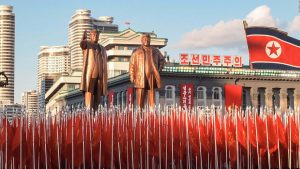 At least for visitors on a carefully supervised tour, crime is virtually non-existent. Pickpockets, on the other hand, are the last thing on your mind. The authorities are very sensitive, so be careful what you say and how you say it. Simply follow the guides’ lead and compliment each location on your trip. Remember the golden rule: “If you have nothing nice to say, don’t say anything at all.”

Furthermore, it is against the rules to roam about on your own. If you are leaving your hotel on your own, you must get authorization and/or have a guide accompany you. This depends depend on the hotel you are staying in. The Yanggakdo Hotel is located on an island in the center of Pyongyang’s Taedong River. As a result, you have a bit more freedom to roam about the neighborhood than if you were staying at the Koryo Hotel in the heart of town. Always be pleasant and kind to your guides and drivers, who will usually reward you by increasing their confidence in you and allowing you greater freedom.

Restraint, care, and common sense are required while shooting pictures. The guides will not be pleased if you seem to be searching for bad pictures of North Korea and will urge you to remove any images that are suspicious. You must not photograph anything military, including people, or anything that portrays the DPRK in a negative way.

In the worst-case situation, you should be able to lift your camera at a fair pace, compose and shoot the photo, and then drop it at an acceptable speed. Don’t attempt to photograph anything you’ve been instructed not to, such as military people or certain locations. This may draw attention to yourself and the picture you’re attempting to capture, and you may be instructed to delete the photograph, whether justified or not.

When leaving the nation by rail, digital cameras are often examined. A easy solution is to leave a memory card with uncontroversial photos in the camera and file away any cards containing material that is politically questionable.

This information should never be revealed to visitors of Korean ancestry. North Koreans have a strong feeling of ethnic identity, which will unavoidably attract unwelcome attention. Furthermore, if you get into difficulty, having a foreign passport won’t help you much if the authorities think you’re a Korean.

Visitors have sometimes been targeted for political reasons; in 2013, the DPRK detained, briefly imprisoned, and expelled an 85-year-old American citizen for his military service during the Korean War.

In North Korea, drug trafficking and drugs use are both punished by death. Marijuana, on the other hand, is legal in North Korea and may frequently be seen growing wild beside the road.

It is highly advised that you do not bring any literature or participate in any religious activities. Kenneth Bae, an American Christian missionary, was detained in North Korea in 2012 and sentenced to 15 years of hard labor for his religious efforts (however, he was released nine months later). Jeffrey Fowle, an American, was also detained for leaving a Bible in a North Korean nightclub and served six months in a North Korean prison.

North Korean drinking water seems to be untreated, and there have been instances of foreigners being hospitalized in the DPRK after drinking the water; thus, bottled water is strongly advised.

Medical facilities are clean, although they are extremely old. If you get sick, it may be preferable to seek medical care in China. If your nation has an embassy or consulate in North Korea, contact them for help.