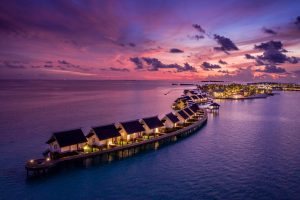 The Maldives consist of 26 atolls, or atholhu in dhivehi – the origin of the English word. These are not individual islands, but huge ring-shaped coral formations hundreds of kilometres wide, fragmented into countless islands.

Naming the atolls is complex, as the atolls have both long traditional Dhivehi names such as Maalhosmadulu Dhekunuburi and snappy code names such as Baa, which refer to administrative regions and can consist of more than one geographical atoll. The code names are actually just the letters of the Dhivehi alphabet, but because they are easier for non-Maldivians to remember and pronounce, the code names are popular in the travel industry and are therefore used here. Of the 20 administrative atoll groups, only (parts of) 10 are open to tourism, and from north to south these are:

Other destinations in Maldives