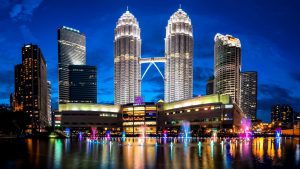 The climate in Malaysia is equatorial. The northeastern monsoon (October to February) floods Borneo and the east coast of the peninsula in rain and causes frequent flooding, while the west coast (especially Langkawi and Penang) is unscathed. The gentler southwest monsoon ( from April to October) reverses the pattern. The southern and central parts of the Malaysian Peninsula, including the constantly humid Kuala Lumpur, are both exposed, but even during the rainy season, showers are usually intense but short.

Since Malaysia is close to the equator, warm conditions are guaranteed. Temperatures generally range from 32°C (90°F) at noon to about 26°C (79°F) at midnight. But as in most Southeast Asian countries, Malaysia’s sunny days are interrupted by the monsoon season every year, and night temperatures can reach a low of about 23°C (79°F) on rainy days.

Highland temperatures tend to be cooler, with Ghenting Highlands, Cameron Highlands and Fraser’s Hill having temperatures between about 17°C (62°F) at night and about 25°C (77°F) during the day. Mount Kinabalu is known to have temperatures below 10°C (50°F).