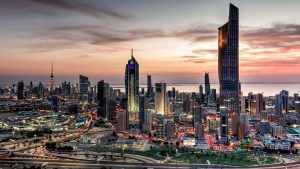 The Kuwaiti dinar is the national currency (KD, KWD).

Keep in mind that the Kuwaiti Dinar is one of the world’s strongest currencies, with an exchange rate of 1KD typically hanging at or around US$3.50, making that oh-so-affordable-seeming 3KD burger even more surprising when you realize it’s more like $10.50!

Notes produced before to 1994, many of which were seized during the Iraqi occupation, are not legal currency. These are unlikely to be seen in Kuwait (the patterns are obviously different), but unscrupulous sellers in other countries have been known to attempt to pass them off. Images may be found at the Central Bank of Kuwait.

Exchanging money is tough, and exchanging travelers’ checks is much more complicated. Stick to ATMs, which are common and reliable. Credit cards are accepted at higher-end businesses.

Although Kuwait is a tax haven (zero percent VAT and zero percent income tax), it would be difficult to live on less than US$100 a day, and an ordinary hotel room can easily cost US$250 or more.

Tipping is not always required. Taking a service fee is now prohibited in Kuwait.

Petrol costs are among the lowest in the world, sometimes being less than the price of water, which explains Kuwaitis’ love for large fuel-guzzling import cars from the United States.

Kuwait is a tax-free zone. Custom-made goods, imported items, and international shipping may be costly, so buy carefully. Businesses are obliged by law to offer fortnightly exchanges on credit card purchases and returns or exchanges on non-credit card transactions. If you suspect a business is not following the rules, contact the Consumer Protection Department at 135.