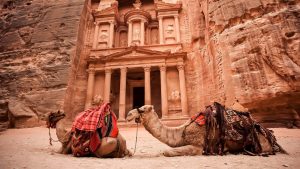 Tourism is one of the most important sectors in the Jordanian economy. In 2010, over 8 million tourists from various countries visited Jordan, with tourism revenues amounting to about $3.5 billion. Another $1 billion was earned from medical tourism to the Kingdom. In 2011, Jordanian tourism lost $1 billion due to political instability throughout the region.

The main tourist attractions include visiting historical sites such as the world-famous Petra (a UNESCO World Heritage Site since 1985 and one of the New Seven Wonders of the World), the Jordan River, Mount Nebo, Madaba, numerous medieval mosques and churches, as well as unspoilt natural sites (such as Wadi Rum and the northern mountainous region of Jordan in general), but also viewing cultural and religious sites and traditions.

Jordan also offers health tourism focused on the Dead Sea area, educational tourism, hiking, diving in the coral reefs of Aqaba, pop culture tourism and shopping tourism in Jordan’s cities. More than half of the approximately 4.8 million Arab tourists in 2009, mainly from the GCC, indicated that they planned to spend their holidays in Jordan.

Locations by the sea in Jordan

Jordan, particularly Amman and to a lesser extent Aqaba, has become one of the region’s nightlife hotspots. Along with Dubai, Beirut, Sharm el Sheikh and Manama, Amman is one of the leading clubbing destinations in the Arab world and the Middle East. The country has seen an explosion of nightlife development, from high-end nightclubs and bars in the capital to world-class raves at the Dead Sea and Wadi Rum. Aqaba has also seen a huge increase in nightclubs and beach clubs due to massive foreign investment and the influx of foreign workers and tourists due to the establishment of the ASEZA special economic zone. The annual Distant Heat in Wadi Rum is considered one of the best raves in the world.

Jordan has a number of nature reserves.