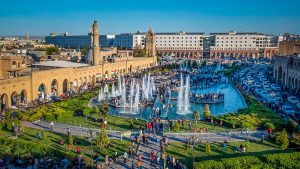 Although Arabic is the official language of Iraq, English is so widely spoken that most visitors will be able to get by in the many stores, marketplaces, and cafés. The disadvantage is that speaking English instantly marks you as a foreigner. Because of the extensive underground network of Iraqis who notify attackers of potential targets, this is hazardous.

In Kurdistan, Kurdish is spoken in one of two dialects: Kurmanji and Sorani. In and around Dohuk, Kurmanji is spoken, whereas Sorani is spoken in and around Arbil (Hewlar) and Sulaymaniyah. These two kinds are incomprehensible to one another. However, Arabic is widely spoken, and the number of English speakers is increasing.