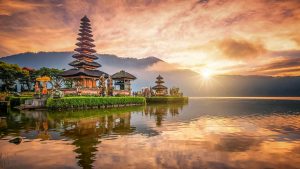 AsiaIndonesiaHow To Get in Indonesia

Most international flights arrive at Soekarno-Hatta (IATA: CGK) in Jakarta, Ngurah Rai (IATA: DPS) in Bali and Juanda (IATA: SUB) in Surabaya. Many airports in secondary cities such as Bandung, Yogyakarta, Balikpapan and Medan also have international flights from Singapore and/or Malaysia, which can be interesting and convenient entry points into Indonesia.

Travelling to Indonesia from America can take less than 20 hours and requires at least one transit to Seoul, Taipei, Tokyo, Hong Kong, Bangkok, etc. The journey from most parts of Europe takes less than 20 hours. While there are direct flights to Jakarta from Amsterdam, London and Istanbul, other cities require at least a stopover in Kuala Lumpur or Singapore, or transit. Australia, on the other hand, is only 4-7 hours away. There are several flights from various cities in the Middle East to Indonesia. There are also short flights from Indonesian cities to nearby Malaysian cities, such as Pontianak to Kuching, Tarakan to Tawau and Pekanbaru to Malacca.

The cost of flying to Indonesia from Southeast Asia and the Pacific has fallen with the emergence of low-cost airlines. Air Asia Group flies to major destinations in Indonesia from Malaysia, Thailand and Singapore. Tigerair and Jetstar are the two airlines that fly out of Singapore, although not as many flights. Lion Air Group flies to Singapore, Penang, Saudi Arabia and has connections to Kuala Lumpur and Bangkok through its subsidiaries Malindo and Thai Lion.

Singapore Airlines and its subsidiary SilkAir are full-service airlines flying to many Indonesian destinations from Singapore and have excellent connections to cities worldwide. Flights to Jakarta from Singapore are among the busiest international routes in the world.

Ferries connect Indonesia with Singapore and Malaysia. Most connections are between ports in Sumatra (mostly in the provinces of Riau and Riau Islands) and those in Peninsular Malaysia and Singapore, although there is also a ferry service between the Malaysian state of Sabah and East Kalimantan on Borneo. There are further boat connections from these ports to Jakarta and other Indonesian islands. More details can be found on the pages of the individual cities.

Ferries are often overloaded and every year there is at least one report of a ferry capsizing with great loss of life. Ferries have different classes of seats, with the most expensive (and cleanest) section upstairs with comfortable seats and windows for a nice frontal view, followed by second class behind in a separate room that is more cramped and dirty with less comfortable seats, and third class is usually on the lower decks and is the worst, although different ferries may have their own organisation.

Visa-free/visa-on-arrival is available at all ports listed above except those marked with *, which require a visa in advance, although there may be exceptions for visa-free visitors.

There are several cruise lines that travel to Indonesia and employ many locals, which has been a way for the locals to enrich their families. You can take a cruise and stop with everyone else at certain places along the way, in which case immigration is handled on your ship. Make sure you return to your ship at the end of such a ‘shore leave’ or you risk being left behind! It may be possible to end your cruise here. In this case, you will need to visit an immigration office after disembarking.

To increase the number of tourist visits, the government has simplified the procedures for entering the country with a yacht. If you enter with a yacht, you only need 3 days’ notice to obtain a permit for a 30-day visit, which can be extended for another 30 days. Yachts can arrive at ports in Jakarta, Batam, Bangka Belitung and Kupang.

From East Timor: The main crossing point is at Mota’ain between Batugade in East Timor and Atambua, West Timor.

From Malaysia: The only formal way to enter by land from Malaysia is through the Entikong-Tebedu crossing between West Kalimantan and Sarawak, Malaysia on Borneo. The crossing is on the main route between Kuching, (Sarawak) and Pontianak, the capital of (West Kalimantan). As the crossing is only listed as a visa-free entry point, nationalities who do not qualify must apply for a visa beforehand.

Note: You are not guaranteed to be able to enter Indonesia through these border crossings, and non-Indonesians must apply for a visa at the nearest Indonesian embassy or consulate.

Early history Fossils and remains of tools show that the Indonesian archipelago was inhabited by Homo erectus, popularly known as "Java Man", between 1.5 million years ago and 35,000 years ago. Homo sapiens reached the region about 45,000 years ago. Austronesian peoples, who form the majority of today's population, migrated...