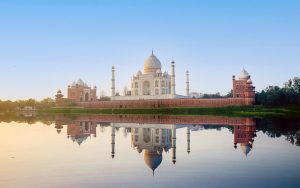 IndiaAgraHow To Travel To Agra

Agra is located 200 kilometers southeast of Delhi and is one of the destinations in the Golden Triangle of Agra-Delhi-Jaipur. Agra is also well-connected by train and road to other neighboring towns and tourist locations, making it an ideal day excursion from Delhi or a stop on a longer journey.

Seasonal service to Agra’s Kheria Airport. Currently, Air India Regional serves the city through the Delhi-Agra-Jaipur tourism triangle route. Agra is one of India’s most renowned cities and is well linked by air to all other major cities in the country. Both destinations are accessible by airplane in less than an hour. Renting a vehicle may be a more cost-effective option.

Agra is located on the major railroad line from Delhi to Mumbai (Bombay) and Delhi to Chennai, and several trains link Agra to these cities daily. Certain eastbound trains from Delhi also pass via Agra, providing direct connections to places in Eastern India (including Kolkata). Each day, there are about 20 trains to Delhi and at least three or four to Mumbai and Chennai. Agra and Delhi are well-known for their dense winter fog, which decreases visibility to near-zero levels. If traveling in late December or early January (during the fog season), travelers should be advised that all trains will slow down and travel times will increase due to limited visibility. For example, the Bhopal Shatabdi may arrive in Agra long after 10:00 a.m. and depart for Delhi well after midnight. From a safety standpoint, traveling by rail is always better during the winter. Please keep in mind that driving in foggy situations is very dangerous.

Train tickets may be purchased online on the Indian Railways website using debit or credit cards. You may arrange “UP Tourism”-led trips in air-conditioned luxury buses from Agra station. Additionally, planned trips depart from Delhi. If you visit during the busy season, you must purchase your tickets many days to a few weeks in advance if you desire to make it a day excursion, which means departing early in the morning and returning at a suitable hour at night.

This is one of Agra’s oldest railway stations due to the presence of a large, octagonal Tripolia Chowk between the Jama Masjid and the Agra Fort’s Delhi gate. This Tropolia was demolished to make room for the Agra Fort Railway Station, which was also Agra’s first railway station and one of the country’s oldest.

There is a freshly constructed motorway between Delhi and Agra, but since it is toll-free, most buses avoid it. Rather of that, they travel the local roads, which greatly lengthens the journey compared to the fast trains (4-5 hr). It is feasible to reach Agra by bus and minibus through lesser routes; however, you must inquire about where the buses to Agra leave, either from a trustworthy local or from the personnel at your hotel/hostel. Bear in mind that Indian “bus stops” are often enormous pavement areas under flyovers, densely packed and devoid of any indicators as to which bus goes where, or stands for private bus companies offering a more pleasant ride at a greater price. This is an adventurous alternative, since your travel may be delayed due to a bus breakdown or a road closure owing to a local protest or other sort of gathering. Take note that this is by far the cheapest method to go to Agra, since it should cost no more than 60 rupees for a regular “bus” and 200 rupees for a more coach-like vehicle.

If you intend to go on these government-run buses, you must insist on your rickshaw driver transporting you there. If you just inquire for buses to Delhi, he would very certainly direct you to a private bus operator from whom he receives a commission. It will be somewhat more costly for you, and since these buses are not direct, they often stop at odd locations and drop you off at random locations as well.

You may either arrange for a cab via your hotel or straight outside the train station. There is often a government-authorized taxi stand, but it may be difficult to locate, and the locals present at the station (hunting for foolish visitors) will not assist you in locating it. 950 each day for eight hours. It may be more expensive to book directly with the hotel, since hotels do have their own tariffs. It is preferable to bargain directly with the driver or book via an online vehicle rental agency.

While automobiles are not permitted near the Taj Complex, the remainder of Agra is readily accessible by vehicle.

NH2 Highway: The principal entry to the highway is along Mathura Road in Delhi, although if traveling from South Delhi or the Delhi Airport, it is more convenient to take Aurobindo Marg (Mehrauli Road) and then make your way up to NH2 through Tughlakabad. While the roadway is split, it is critical to watch for trucks, vehicles, and bullock carts traveling in the opposite direction. It is possible to rent a vehicle with a driver (a large automobile for five passengers costs 3,500 rupees from/to the Delhi airport). However, if you need to go from Agra to the airport in order to catch a flight, allow enough of time for the journey, since traffic conditions may greatly lengthen the drive. Additionally, it is good to get acquainted with your driver. There are instances when he may take more than five hours to complete the journey, and you cannot compel him to travel quicker than an autorickshaw (tuk-tuk).

Tongas, electric buses, and electric tempos are commonly available and are the most convenient method to reach the Taj, which is not accessible by automobile. There are auto-rickshaws and cycle-rickshaws around; remember to agree on fares in advance. If you are a foreigner, please certain that you bargain aggressively...

The exquisite Taj Mahal and Agra Fort are by far Agra's top two attractions. When arranging your trip, bear in mind the complex entrance fee system: the Taj Mahal, Agra Fort, Itmud-ad-Daulah, Sikandra, and Fatehpur Sikri all need payment of a 500 charge to the Agra Development Authority in...

Adlabs Multiplex. The Interactive Theatre, the world's first interactive theater, provides each spectator with a wireless remote device equipped with push buttons and a tiny LCD screen that enables them to play in a trivia game based on the film's topic. The show is called India in Motion, and it...

Petha, a sort of very sweet candy, and Dal Moth, a spicy lentil combination, are Agra specialties. Both of these items are also popular as souvenirs.Chaat - Agra is a Chaat lover's paradise. Chaat comes in a variety of varieties, but one thing they all have in common is...

Numerous stores in Agra offer stone objects, ranging from jewelry to tiny boxes and plaques with inlay work reminiscent of the Taj Mahal. The greatest of them are magnificent, yet even the most mundane are rather lovely. Additionally, Agra is well-known for its leather items. Consider spending some time...

A bottle of Indian beer costs between 70 and 100 rupees at a hotel, although Agra has no nightlife other from cultural acts at some of the bigger hotels and restaurants. Once you've left the streets of Agra and checked into your hotel, you're unlikely to return.Amar Vilas Bar, Taj...

Don't leave any cash or valuables in your hotel room. Check all hotel, restaurant, and lounge bills for mistakes.Never pay anybody in advance for anything, especially taxi drivers. Pickpockets should be avoided.If you do decide to buy anything, keep in mind that most things are cheap knockoffs of originals...