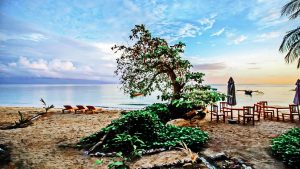 East Timorese, like Indonesians, eat rice and spices as a main cuisine. Despite the difficulty in getting supplies from outside owing to political instability, many Dili eateries offer Western food. The large number of foreigners living and working in East Timor ensures that these eateries have a devoted customer base.

In addition to native East Timorese food, the East Timorese palate has a liking for many foreign cuisines. East Timor’s cuisine has been influenced by Portuguese, Indonesian, Chinese, Italian, Western, Japanese, and Thai influences.

Rice is East Timor’s main meal. Taro, cassava, sweet potatoes, and maize are common food crops. Vegetables that are popular include beans, cabbage, cowpeas, onions, and spinach. People also raise chickens, goats, and pigs. Fish is an essential component of the diet and may be used to enhance any meal. Spices are used liberally in most traditional East Timorese dishes. The most frequent fruits grown here are mangoes, watermelons, papayas, bananas, and coconuts. Carbohydrates such as sago or other grains are the primary course for many East Timorese meals.

Fried fish is a popular meal, and prawns are regarded as a delicacy. Curries are a popular meal, with chicken curry topping the list as the most popular. Many East Timorese like genuine Indonesian, Japanese, Portuguese, and Chinese cuisine.

East Timor’s coffee is produced organically, and the caffeine content is very high. Those who want anything other than coffee may choose for beer, which is readily accessible in East Timor’s bars and restaurants.

Bills given at East Timorese restaurants do not include a service fee. If you want to tip, keep in mind that even a 10% tip is a lot of money to a local. In any event, the service is usually so poor that you shouldn’t feel obligated to tip.

Traditional Asian curries with aromatic spice pastes and fried accompaniments are available in restaurants in East Timor and local food outlets across this new country. Native East Timorese restaurants specialize on fresh grilled fish and superb curries, as well as the opportunity to fully enjoy local food and friendliness. Local cuisine also lends itself to Papuan influences, therefore yam and sweet potato will be on the menu when you visit rural food booths.

Dili’s nightlife is dominated by a plethora of beachside bars and nightclubs. Food and beverages are available, and the bars/nightclubs remain open till late. Nautilaus, Diya, Ocean View Hotel, and Gion Japanese Restaurant are some of the best inner-city eateries. The recently refurbished Atlantic Bar and Grill in the Meti Aut neighborhood offers some of the finest service and quality in Timor. Another option is the Caz Bar, where kayaks may be rented late at night and a barbecue offers fried fish and other beachside fare including sizzling garlic prawns, hamburgers, and a wide selection of cool beer.