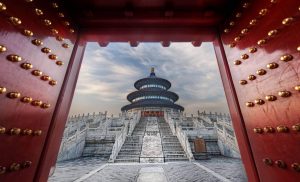 During the holidays, especially Chinese New Year and National Day, hundreds of millions of migrant workers return home, and millions of other Chinese travel within the country (though many in the service sector stay behind and enjoy the extra pay). Travellers should seriously consider avoiding being on the road, on the rails or in the air during the big holidays. At the very least, travel should be planned well in advance. Every mode of transport is extremely crowded; tickets of any kind are hard to come by and will cost you much more, so it may be necessary to book well in advance (especially for those travelling from remote western China to the east coast or in the opposite direction). Train and bus tickets are usually quite easy to buy in China (during non-holiday periods), but the difficulties caused by overcrowding at these times cannot be overstated. Travellers who are stuck at these times and cannot buy tickets can sometimes get airline tickets, which are slower to sell out because of the higher but still affordable (by Western standards) prices. For the most convenient way to get around, the plane is the obvious choice. There is an up-and-coming, state-of-the-art bullet train network that is also very nice, but you may have to deal with many insanely crowded, smoky, cold, noisy and disorganised train depots to board. The Spring Festival (Chinese New Year) is the largest annual migration of people on earth.

Chinese New Year is particularly busy. Not only is it the longest holiday, it is also a traditional time to visit family, and the whole country pretty much shuts down during this time. Most migrant workers in the cities return to their farms and villages, which is often the only option they have. Around Chinese New Year, many shops and other businesses will be closed for a few days to a week or even longer. For this reason, it is not ideal to travel during this time unless you have close friends or relatives in China.

Around twenty million students return home at the beginning of July and then school starts again at the end of August, so there is a lot of activity on the roads, trains and planes at these times.

A complete list of Chinese festivals would be very long, as many areas or ethnic groups have their own local festivals. See listings for individual cities for details. Here is a list of some of the nationally important festivals not mentioned above:

In addition to these, some Western festivities are noticeable, at least in the larger cities. Around Christmas you hear carols – mostly in English, a few in Latin, plus Chinese versions of “Jingle Bells”, “Amazing Grace” and for some reason “Oh Susana”. Some shops are decorated and you see many shop assistants with red and white elf caps. For Valentine’s Day, many restaurants offer special dishes. Chinese Christians also celebrate services and masses in officially recognised Protestant and Catholic churches.