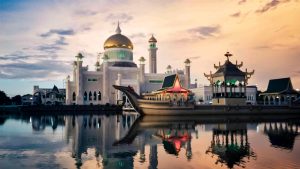 AsiaBruneiHow To Travel To Brunei

Brunei’s sole airport is Brunei International Airport (BWN), which serves as the hub for Royal Brunei Airlines (RBA). The airport is tiny, but it is well-kept and functioning.

The RBA decreased its services significantly after an overzealous growth and heavy losses in the 1990s, although it still had a good network with daily flights to London, Dubai, Kuala Lumpur, Singapore, and Kota Kinabalu, as well as four weekly non-stop flights to Kuching. The cost of traveling via Brunei is reasonable, and you will be greeted with a grin. In addition, Singapore Airlines and Malaysia Airlines both fly twice weekly from Singapore and Kuala Lumpur, respectively. MASwings, a Malaysia Airlines affiliate, also flies to and from Kuching through Mulu many times a week. AirAsia offers one-way flights to Kuala Lumpur for just USD35. Other options include the finest transit airports in Singapore and Kuala Lumpur.

A departure tax of $ 5 for flights to Kuching and Kota Kinabalu and $ 12 for other foreign destinations is included in the price of a ticket to Brunei.

Arrival / Departure: A cab from Kuala Lumpur to Bandar Seri Begawan takes around 20 minutes and costs about $25. A covered walkway leads to a bus stop for purple city buses ($ 1) at the end of the parking lot farther away from the terminal (to the right of the arrival).

From Sarawak, Malaysia, you may drive to Brunei. For the major portion of Brunei, there are two entrance points: one at Sungai Tujuh for Miri and another in Kuala Lurah for Limbang (Tedungan on the Malaysian side). At the border, both crossroads have immigration checks, however lines may be very lengthy, particularly on weekends.

In Brunei, towns from Sarawak to Limbang and Lawas to Temburong District are also accessible by car. In December 2013, a bridge over the Pandaruan River was opened, and the ferry service was stopped. Pandaruan (Malaysia side, inaugurated in June 2007) and Puni are currently the locations for immigration (Brunei side, opened in 2013). Another bridge connects the banks of the Trusan River between Lawas (which is linked by road to Kota Kinabalu in Sabah, Malaysia) and Lawas (which is connected by road to Kota Kinabalu in Sabah, Malaysia) (and a ferry trip is not required). Malaysian immigration procedures are now completed at Trusan (the immigration office, formally known as the Mengkalap immigration checkpoint, is located east of the border) rather than Lawas. Those from Brunei may be obtained at the Labu border crossing.

In one day, you may drive from Kota Kinabalu, Sabah, to Bandar Seri Begawan. For additional information, see to the Brunei ground page for Kota Kinabalu.

Due to a tax issue, only a few petrol stations in the nation may sell fuel to vehicles with non-Brunei license plates. Finding these stations and ensuring that your vehicle is fully fueled may be difficult.

Due to the construction of the free friendship bridge linking the two eastern Limbang borders, the Malaysian-Brunei ferry, the Malaysian town of Limbang, and the Brunei Temburong district have all been disbanded since December 2013.

The Serasa Ferry Port in Muara is Brunei’s major ferry terminal, with multiple daily boats to and from Labuan, as well as a daily ferry to Lawas and Sundar in Sarawak. You may even travel to Kota Kinabalu, Sabah, in one day by changing boats at Labuan. See the Brunei by Land page for more information about Kota Kinabalu.

The container entrance is situated in Muara, which is a short distance from the ferry port. Bandar Seri Begawan is approximately 25 kilometers from the terminal. Getting there: Purple buses (numbers 38 and 39) run between the ferry port and BSB. Buses are inexpensive ($1), although they may take up to two hours, including delays and transfers. You may also take the bus or a cab.

From Brunei to Sabah, there is a vehicle ferry service.

To leave Brunei, you must pay a tax (“cukai kepala”) (currently $2 per ferry trip). If you didn’t get a tax coupon while buying your tickets, inquire at the counters/travel agency.

By car A "highway" runs down the shore from Bandar Seri Begawan (the capital). It becomes a double and therefore only driveway, although it is adequate for all cars up to Kuala Belait and the Malaysian toll bridge in Sarawak to the west). There is also a minor route that leads...

Brunei's culture is primarily Malay (representing its heritage) with significant Islamic influences, although it is considerably more conservative than Indonesia and Malaysia. Bruneian culture is influenced by Malay civilizations found across the Malay archipelago. There have been four eras of cultural, animistic, Hindu, Islamic, and Western influence. Islam had...