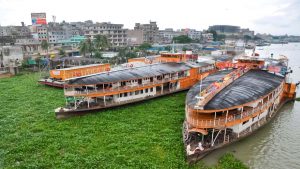 Following a series of assaults particularly targeting foreigners committed by Islamist extremists that started in September 2015 and culminated in a café attack in Dhaka that killed 20 foreigners on July 5, 2016, the United States and Japan issued travel warnings to Bangladesh.

Bangladesh is a nation where people are kind and open-minded. However, since it is a poor nation with a high poverty rate, there are destitute or nasty individuals who may exploit a foreigner or visitor. Some of their tactics may be seen in frauds and ordinary pickpockets.

Use common sense measures, such as avoiding wandering alone after dark or needlessly. Also, if you’re in danger, make a lot of noise to attract the attention of others, who will almost certainly rush to your rescue. Foreigners, particularly Caucasians, will feel comfortable strolling about the city’s streets since you will certainly be seen by a large number of inquisitive individuals at all times. Keep your valuables close at hand while commuting by rickshaw, CNG (auto-rickshaw), or bus. Wearing costly jewelry without care is not recommended; most middle-class individuals today wear gold/silver, rhinestone/clay imitations, and beaded pendants.

Local women’s attire differs by faith and religious conservatism, socio-political environment (which changes by historical period), geographical location, and socio-economic position. As a visitor, it is generally preferable to wear at least a salwar kameez, which is both simple to wear and reasonably flexible and practical while being culturally acceptable. If you don’t have or don’t want to purchase a salwar kameez, wrap a big scarf over your upper body instead. Bangladesh is a conservative country, and if you’re a foreign lady, you’ll get a lot of attention. Wearing shorts, tank tops, or anything with a lot of skin is not a good idea. However, much of Bangladesh is a somewhat liberal Muslim nation, and young people in major cities (such as Dhaka, Chittagong, and others) are well-acquainted with Western culture.

In Bangladesh, national strikes, also known as “hartals,” are a common form of political protest. In recent years, the political opposition has called for a number of these hartals, which have resulted in the virtual shutdown of transportation and trade, as well as assaults on people who do not follow the hartals. During the hartals, clashes between opposing political parties led in fatalities and injuries. Any political protest, demonstration, or stroll must be avoided by visitors. Visitors should take care in all locations and remain as inside as possible during hartals. Hartals, manifestations, and other manifestations may happen at any moment and last anywhere from a few minutes to many weeks. If you’re in Bangladesh during a strike, expect your reserved road transportation choices to be unavailable, since protestors are used to blocking roadways and torching any cars on the road. Taking the train as an alternative is a good idea since protestors seldom obstruct the tracks. If you have an urgent need to go someplace (such as the airport) during a strike, you may hire an ambulance that will transport you across strike zones for a charge. Some areas of Dhaka may be under police control during the strikes, allowing for safe transit.

It is advised not to eat, drink, or smoke anything given by strangers – this is a rising issue in many Asian nations countries, and you will often notice posters advising you not to use buses, trains, or other forms of public transportation. You should not accept someone’s offer of a home-cooked dinner, but you should think carefully about accepting the candy that the person sitting next to you just gave you. In addition, keep cleanliness standards for local street food and snacks in mind.

Many people are killed by buses, coaches, and fast vehicles. Cars often disregard traffic signals and traffic lights, and traffic bottlenecks are unavoidable, making transit for pedestrians very difficult. The most important thing to remember is to avoid driving or walking alone on major highways. As a result, road travel (if absolutely required) is best accomplished with a local driver in a decent vehicle equipped with seat belts. Rickshaws should be used with care; although they are a highly genuine local unit, they are also the most hazardous mode of transportation, particularly on major roads (it is now prohibited).

Under Bangladeshi law, homosexual conduct between consenting adults is punishable by prison terms ranging from 2 to 10 years. Travelers who identify as LGBT must take caution.

By plane The country's primary entry point is Dhaka's Shahjalal Foreign Airport (IATA: DAC)in Bengali, but international flights from provincial hubs Chittagong and Sylhet are restricted. Biman Bangladesh Airlines is the national carrier, but it has a poor reputation for timeliness, hygiene, security, and route maintenance. Many routes have been discontinued as...

By plane Bangladeshi air travel is both inexpensive and easy. Domestic airlines come and go, so it's worth checking to see who's the most recent and dependable. After the launch of a new business, the quality of service and the condition of aircraft tend to decline, leaving the market open...

Regions in Bangladesh Bangladesh is a tiny nation divided into eight administrative zones: Division of DhakaThe capital city, jute, and rice paddies are all found here. Division of ChittagongGreat hills, woods, and beaches make up the beautiful hinterland. Division of RajshahiSilk, mangoes, and hundreds of ancient sites are among the island's many attractions. Division...

The city is buzzing with activity. Dramas, concerts, and plays, both western and local, abound in this vast metropolis, as they do in every major city. Yes, it is feasible to wind up at a live thrash music rave event in Dhaka! Bangladesh is a country rich in tourist attractions,...

Food in Bangladesh Bangladesh is a fisherman's paradise. Historically, the majority of the country has plentiful freshwater river fish, particularly the Hilsa, which has been designated as the "national fish." Hilsa has a wonderful flavor, but some people find the numerous fine bones difficult to handle; if you can eat...

Internet Most of the bigger cities have internet access, which costs about 25-30 TK per hour. The majority are connected to the internet through broadband, although the speed does not match international standards. Some Internet service providers currently provide the WiMAX service. WiFi access is also available in certain areas...

Although the majority of Bangladeshis are religious, secular ideas are not uncommon. People in general are very welcoming, and a few measures will ensure that this remains the case: The left hand, like in other adjacent nations, is considered unclean and is used to go to the toilet, remove shoes,...

Literature The inscription "Mahasthan Brahmi," which goes back to the 3rd century BC. Christ, is Bangladesh's earliest evidence of writing. Sanskrit literature thrived in the area under the Gupta Empire. In the 11th century, Sanskrit and Praguri combined to become Bengali. Bengali literature dates back millennia. The Charapapods are among...

Ancient and classical Bengal Humans have been present in the Greater Bengal area for more than 20,000 years, according to Stone Age artifacts discovered there. Copper Age villages have been discovered dating back 4,000 years. In waves of migration, Austroasiatics, Tibeto-Burmans, Dravidians, and Indo-Aryans inhabited ancient Bengal. When the Northern Black...