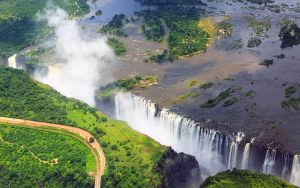 Many stone towns were constructed in modern-day Zimbabwe. The most magnificent and well-known of them, Great Zimbabwe, was constructed in the 15th century, although people had been living on the site since about 400 AD. The Khami Ruins, located outside of Bulawayo, are another excellent example.

The population was overwhelmingly made up of Shona speakers until the 19th century, when the Nguni tribe of the Ndebele settled in what is now Matabeleland (in 1839-40), and then in 1890, the territory came under the control of the British South Africa Company under charter from the British Government.

The United Kingdom acquired the territory, then known as Southern Rhodesia, from the British South Africa Company in 1923, when the nation gained its own government and Prime Minister. In 1961, a constitution was drafted that favored whites in positions of authority. This white supremacist regime unilaterally proclaimed independence as Rhodesia in 1965, but the UK refused to recognize the act and sought voting rights for the black majority. UN sanctions and guerrilla warfare eventually resulted in both free elections and independence (as Zimbabwe) in 1980.

Robert Mugabe became Zimbabwe’s first black leader. Unfortunately, he became a tyrant and has stayed in power since 1980. (1980-1987 as Prime Minister, and thereafter as President). Beginning in 2000, the government forcibly expropriated several highly productive farms owned by white Zimbabweans and gave them over to members of Mugabe’s ZANU Party who were untrained in farming, resulting in a dramatic drop in local food production. In 2005, he began a campaign to remove slums, pushing hundreds of thousands of people into the streets. Election rigging and human rights violations resulted in the country’s expulsion from the Commonwealth and international sanctions. Misrule and sanctions eventually resulted in huge, runaway inflation and an exodus from the nation. In 2008, after massive demonstrations, President Mugabe and the head of the major opposition party, Morgan Tsvangirai, struck a power-sharing deal. Since then, the situation has calmed, but Mr. Mugabe remains President and has been accused of additional vote fraud in order to retain power.

Regions in Zimbabwe MatabelelandThe western portion of the nation is made up of Bulawayo, the second biggest city, the magnificent Victoria Falls, and Hwange National Park. The Lower Zambezi and Lake KaribaThe eastern edge of Lake Kariba is a favorite holiday destination for Zimbabweans. Many national parks, such as Mana Pools...

Food in Zimbabwe Ask for "sadza and stew/relish" to get a taste of what Zimbabweans eat (in some manner, almost every day). The stew will be familiar, served over a big amount of sadza, a thick ground corn paste (vaguely similar to polenta and with the consistency of thick mashed...