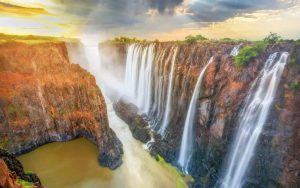 Prior to the formation of modern Zambia, the indigenous people lived in several tribes, each with its own way of life. The development of urbanisation was one of the outcomes of the colonial period. Different ethnic groups began to coexist in towns and cities, influencing one another and absorbing much of European culture. In rural regions, the indigenous cultures have mostly persisted. The blending and development of various cultures in the urban environment has resulted in what is now known as “Zambian culture.”

Pottery, basketry (such as Tonga baskets), stools, textiles, mats, wooden carvings, ivory carvings, wire craft, and copper crafts are among the most popular traditional arts. Drums (and other percussion instruments) are used extensively in Zambian traditional music, as well as singing and dance. Foreign music styles, particularly Congolese rumba, African-American music, and Jamaican reggae, are popular in metropolitan areas. WITCH, Musi-O-Tunya, Rikki Ililonga, Amanaz, the Peace, Chrissy Zebby Tembo, Blackfoot, and the Ngozi Family were among the psychedelic rock musicians that emerged in the 1970s to establish the Zam-rock genre.

On the day of the 1964 Summer Olympics’ closing ceremony, Zambia proclaimed independence, making it the first nation to join an Olympic games as one country and leave as another. Zambia competed in the Beijing Olympics in 2008.

Football is Zambia’s most popular sport, and the Zambia national football team has had its share of success in the sport’s history. The national team beat the Italian national team 4–0 in the Seoul Olympics in 1988. In that encounter, Kalusha Bwalya, Zambia’s most famous footballer and one of Africa’s best footballers in history, scored a hat trick. Many commentators still believe that the best squad Zambia has ever had was the one that died in an aircraft accident in Libreville, Gabon, on April 28, 1993. Despite this, Zambia was placed 15th in the FIFA World Football Nation rankings in 1996, the highest of any southern African team. Zambia won the African Cup of Nations for the first time in 2012, after previously losing in the final. In the final, they defeated Côte d’Ivoire 8–7 in a penalty shootout, which was held in Libreville, only a few kilometers from the aircraft disaster that occurred 19 years before.

In Zambia, rugby union, boxing, and cricket are other prominent sports. Notably, in the early 2000s, the Australian and South African national rugby teams were led by George Gregan and Corné Krige, both of whom were born at the same Lusaka hospital. Zambia is home to the world’s tallest rugby poles, which are situated in the Luanshya Sports Complex in Luanshya.

Rugby union is a small sport in Zambia, although it is gaining popularity. They have 3,650 registered players and three officially organized clubs, and are presently rated 73rd by the IRB. As part of Rhodesia, Zambia used to play cricket. Eddie Tembo, a Zambian-born shinty international, represented Scotland in the compromise rules Shinty/Hurling game versus Ireland in 2008.

The tenth All-Africa Games were scheduled to take place in Zambia in 2011, with three stadiums being constructed in Lusaka, Ndola, and Livingstone. The Lusaka stadium would accommodate 70,000 people, while the other two stadiums would each house 50,000 people. Due to a lack of public funding for the project, the government encouraged the private sector to participate in the building of sporting facilities. Zambia’s candidacy to host the 2011 All-Africa Games has subsequently been withdrawn due to a lack of finances. As a result, Mozambique stepped in to host the event instead of Zambia.

Madalitso Muthiya, a Zambian, was the first black African to compete in the United States Golf Open, one of the four major golf events.

The country’s basketball team had its finest year in 1989, when it qualified for the FIBA Africa Championship and placed among the top ten teams in Africa.