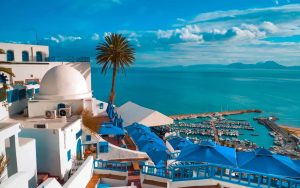 Tunisian cuisine is similar to Middle Eastern cuisine and is based on the traditions of the North African Maghreb, with couscous and marka stew (similar to Moroccan tagines) forming the backbone of most dishes. Unlike the Moroccan dish of the same name, the Tunisian tagine is an omelette-like pâté, made of meat and vegetables mixed with herbs, legumes and offal, filled with eggs and cheese, and baked in a casserole dish until the eggs are set, similar to an Italian frittata. Lamb forms the basis of most meat dishes and local seafood is abundant. Although pork products are not widespread, they can still be found in certain supermarkets and in tourist hotels.

Regrettably, restaurant culture in Tunisia is very underdeveloped and most food prepared in restaurants outside Tunisian homes or souks is disappointingly bland and carelessly presented. These characteristics run the gamut of prices, although occasionally you can eat tasty couscous or “coucha” stew in some budget restaurants. In Tunisia, the best chance of getting a good meal is to be invited to someone’s house as a guest or to eat at an open-air market food stall.

Being an advanced Muslim country, the availability of alcohol is limited (but not severely) to certain licensed (and invariably more expensive) restaurants, holiday areas and magasin général shops. Major department stores (Carrefour in Marsa/Carthage) and some supermarkets (e.g. Monoprix) sell beer and wine, as well as some local and imported hard liquor, except on Muslim holidays. Female travellers should be aware that outside resorts and areas with high concentrations of tourists, they may find themselves having a beer in a smoky bar full of men drinking in a more dedicated manner. Some bars will refuse to admit women, others will ask for a passport to check nationality. Look around a bar before you decide to drink!

With plane The main international airport for regular flights to Tunisia is the International Airport Tunis-Carthage (IATA: TUN), which is located close to Tunis. From the airport, you can take a taxi to the centre of Tunis (be careful, the taxi meters may be tampered with). They are best stopped...

With plane TunisAir express is the domestic airline branched off from TunisAir. There are flights between Tunis and Tozeur, Djerba and Gabès, and also those to Malta and Naples. The website is only available in French. Booking is possible online or through the Tunisair Express agencies. With car Tunisian highways are similar...

There are many good hotels in Tunisia. In the bigger cities there are many smaller hotels hidden in most of the streets. You can also rent a furnished flat. Some private people offer their own flats for rent, especially in summer. It is advisable to organise your accommodation online or by...

History and archaeology Although Tunisia is now mostly known for its beach holidays, the country has an amazing heritage with some extraordinary archaeological remains to explore. Little remains of Carthage, but what is there is relatively well preserved compared to the rest of the ruins in Tunisia. This great city from...

Beaches Beach holidays in Tunisia are very popular, especially with Europeans. Some of the most important beach resorts are along the east coast, from La Goulette (near Tunis) to Monastir.The southern island of Djerba is an alternative. Many water sports activities are widely available or you can just relax and...

Phone in Tunisia All towns and most villages have public telephones under the name of Publitel or Taxiphone. International calls are usually quite expensive (DT 1,000/minute for calls within the EU).t There are three GSM mobile operators, the private Tunisiana , the private Orange and the state-owned Tunisie Telecom...

Tunisia is a Muslim country and dress code is important, especially for women. While a lot of skin (even topless) is tolerated on the beaches and in hotel complexes, a modest amount of exposed skin may be frowned upon outside these areas. Be aware that Tunisia becomes more conservative the...

Culture Of Tunisia is mixed, having been shaped by external influences for a long time: Phoenicians, Romans, Vandals, Byzantines, Arabs, Turks, Italians, Spaniards and French - they have all left their mark on the country. Painting in Tunisia The emergence of contemporary Tunisian painting is closely linked to the School of...

Ancient Farming methods reached the Nile Valley from the Fertile Crescent region around 5000 BC and spread to the Maghreb by around 4000 BC. The farming communities of the humid coastal plains of Central Tunisia represent the ancestors of the present-day Berber tribes. In ancient times, it is believed that Africa...

Stay safe in Tunisia Violence Tunisia has recently experienced a revolution and is currently in a controversial transition phase. Although there is currently no large-scale violence, demonstrations do occur from time to time and are sometimes violent and/or brutally dispersed. Therefore, before travelling to Tunisia, check with your foreign office about...