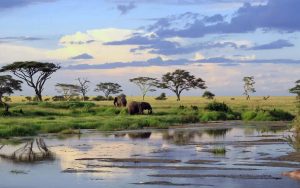 Tanzania’s official languages are Swahili and English. Swahili, on the other hand, is the most widely spoken language in the country, with English used mostly in business and higher education. Individual ethnic groups speak over 100 distinct languages, but Swahili is nearly widely spoken across the nation.

This is when having a basic understanding of Kiswahili may be inconvenient. Tanzanians and Westerners do not work at the same time. This is not to be confused with Africa time, which is the idea that appointments are flexible and individuals may show up whenever they choose. It is irrational for Tanzanians for the day to begin in the middle of the night.

Because dawn and sunset are almost same all year, at 6 a.m. and 6 p.m., the day begins at 6 a.m., which is 0 hours. Tanzanians always deducted 6 hours for western time when stating time in Kiswahili. To a Tanzanian, 11 a.m. is 5 a.m. A Tanzanian will tell time in English if they wish to use the western standard, and in Kiswahili if they want to use the local standard, to prevent any misunderstanding.

If you wish to practice your Kiswahili, bear this in mind while speaking with a Tanzanian about appointment times. If you say Saa kumi na moja asubuhi (11 a.m.) instead of Saa tano asubuhi (5 a.m.), you’ll have to wait 6 hours if the person comes on time, plus whatever long it takes to be fashionably late!