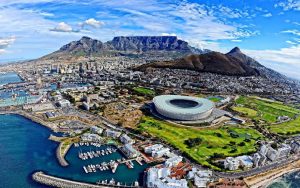 South Africa is an important hub for air travel in the Southern African region. The country’s flag carrier, South Africa Airways (SAA), has an extensive global and pan-African network of connections, some of which are operated by its short-haul subsidiaries SA Airlink and SA Express.

South Africa has 10 international airports. The primary intercontinental hub is O.R. Tambo International Airport in Johannesburg; the secondary is Cape Town International. They serve as gateways for tourists and foreign visitors, as well as hubs for travel within South Africa and Southern Africa in general.

Note: Luggage theft at airports is common, especially at O.R. Tambo International Airport in Johannesburg. Therefore, avoid packing valuables such as jewellery and expensive equipment in your main luggage if you can, and put them in your hand luggage.

A real adventure is flying in an old classic airliner. There are some tour operators that offer such flights, mainly in the Gauteng region.

Some popular services are:

If you are entering from one of the other southern African countries, you can do so by car. A number of land border posts are being operated by South Africa both between itself and its immediate neighbors. Among the most widely used ones are:

With most of the larger cruise lines, such as Princess Cruises, serving Cape Town as one of their destinations, you may want to try something different.

RMS St Helena. This passenger/cargo ship is the last working Royal Mail Ship and stops in Cape Town on its way to St Helena. It is one of the few remnants from the once great era of ocean liners.