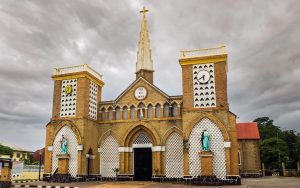 Around 1500 BC, Bantu-speaking peoples who established tribes during the Bantu expansions ousted and assimilated the region’s first occupants, the Pygmy people. The Bakongo, a Bantu ethnic group that inhabited portions of modern-day Angola, Gabon, and the Democratic Republic of the Congo, served as the foundation for ethnic affinities and rivalries between those nations. Several Bantu kingdoms, most notably the Kongo, Loango, and Teke, established trade routes extending into the Congo River basin.

In 1484, the Portuguese navigator Diogo Co arrived at the entrance of the Congo. Commercial connections developed rapidly between the interior Bantu kingdoms and European traders who exchanged commodities, manufactured products, and individuals kidnapped from the hinterlands. After decades as a key transatlantic commerce center, direct European colonization of the Congo river delta started in the late nineteenth century, weakening the authority of the region’s Bantu cultures.

The territory north of the Congo River was ceded to France in 1880 as a consequence of Pierre de Brazza’s contract with Makoko of the Bateke. In 1903, this Congo Colony was renamed French Congo, then Middle Congo. In 1908, France established the French Equatorial Africa (AEF), which included the Middle Congo, Gabon, Chad, and Oubangui-Chari (the modern Central African Republic). Brazzaville was named as the federal capital by the French. During the first 50 years of colonial administration in Congo, economic growth was focused on natural-resource exploitation. The tactics used were often brutal: it is believed that the building of the Congo–Ocean Railroad after World War I cost at least 14,000 lives.

Between 1940 and 1943, Brazzaville served as the symbolic capital of Free France during the Nazi occupation of France. The 1944 Brazzaville Conference signaled the beginning of a period of significant change in French colonial policy. Because of its pivotal geographic position within AEF and the federal capital in Brazzaville, Congo benefitted from the postwar growth of colonial administrative and infrastructure expenditures. Following the passage of the 1946 constitution that created the Fourth Republic, it also gained a local legislature.

Following the reform of the French constitution that resulted in the establishment of the Fifth Republic in 1958, the AEF was disbanded into its component sections, each of which became an independent colony within the French Community. During these changes, Middle Congo was renamed the Republic of the Congo in 1958, and its first constitution was issued in 1959. Antagonism between the pro-Opangault Mbochis and the pro-Youlou Balalis led to riots in Brazzaville in February 1959, which were put down by the French Army.

On August 15, 1960, the Republic of the Congo gained complete independence from France. Fulbert Youlou served as the country’s first president until a three-day revolt organized by labor leaders and opposing political parties deposed him. The Congolese military temporarily seized control of the nation and established a civilian temporary administration led by Alphonse Massamba-Débat.

Massamba-Débat was elected President for a five-year term under the 1963 constitution. The government chose “scientific socialism” as the country’s constitutional philosophy under Massamba-presidency. Débat’s Congo established diplomatic ties with the Soviet Union, the People’s Republic of China, North Korea, and North Vietnam in 1965. Massamba-administration Débat’s also allowed several hundred Cuban army soldiers into the nation to train his party’s militia groups, and these troops helped his government survive a coup launched by future President Marien Ngouabi-aligned paratroopers in 1966. Nonetheless, Massamba-Débat was unable to unite the country’s diverse institutional, ethnic, and ideological divisions, and his government ended suddenly in September 1968 with a bloodless coup d’état.

Marien Ngouabi, a participant in the coup, was elected president on December 31, 1968. One year later, President Ngouabi declared the People’s Republic of the Congo, Africa’s first “people’s republic,” and announced the decision of the National Revolutionary Movement to alter its name to the Congolese Labour Party (PCT). Ngouabi survived a coup attempt in 1972 before being murdered on March 16, 1977. After that, an 11-member Military Committee of the Party (CMP) was appointed to lead an interim government, with Joachim Yhombi-Opango serving as President of the Republic. Two years later, Yhombi-Opango was deposed, and Denis Sassou Nguesso was elected president.

Sassou Nguesso allied the nation with the Eastern Bloc and signed a friendship treaty with the Soviet Union for twenty years. To sustain his dictatorship, Sassou had to depend more on political repression and less on patronage over time.

Pascal Lissouba, Congo’s first elected president (1992–1997) during the time of multi-party democracy, tried to undertake economic reforms to liberalize the economy with IMF support. When civil war broke out in Congo in mid-1997, the IMF had recently authorized a three-year SDR69.5m (US$100m) enhanced structural adjustment facility (ESAF) and was on the brink of announcing a renewed yearly agreement.

Congo’s democratic development was halted in 1997, when Lissouba and Sassou began fighting for control in the civil war. As the July 1997 presidential elections neared, tensions between the Lissouba and Sassou camps grew. President Lissouba’s government troops approached Sassou’s compound in Brazzaville on June 5, and Sassou ordered members of his private militia (dubbed “Cobras”) to fight. So started a four-month war that destroyed or damaged most of Brazzaville and resulted in the deaths of tens of thousands of civilians. Early in October, the Angolan regime launched an invasion of Congo in order to put Sassou in power. The Lissouba administration was deposed in mid-October. Sassou proclaimed himself president soon after.

In the contentious elections of 2002, Sassou received almost 90 percent of the vote. His two major opponents, Lissouba and Bernard Kolelas, were barred from running, and the only remaining viable contender, Andre Milongo, urged his followers to boycott the elections before withdrawing from the campaign. In January 2002, a referendum approved a new constitution that gave the president additional powers, prolonged his tenure to seven years, and established a new bicameral parliament. International observers criticized the organization of the presidential election and the constitutional referendum, both of which were reminiscent of the Congo’s one-party state period. Following the presidential elections, combat resumed in the Pool area between government troops and rebels headed by Pastor Ntumi; a peace deal was reached in April 2003 to end the war.

In July 2009, Sassou also won the presidential election. The election was marred by “extremely low” participation and “fraud and irregularities,” according to the Congolese Observatory of Human Rights, a non-governmental group. In March 2015, Sassou declared his intention to seek for re-election, and a constitutional referendum in October resulted in a revised constitution that enabled him to run in the 2016 presidential election.

By plane Maya-Maya Airport (IATA: BZV) in Brazzaville is served by Air France, as well as flights to Douala in Cameroon, Addis Ababa and Kinshasa by Ethiopian Airlines, Nairobi, Casablanca, and the National Carrier ECAir. By car Driving is safe in the Republic of the Congo. A well-maintained road leads north from...

By shared taxi or minibus In Brazzaville, very inexpensive shared taxis and minibuses operate on an ad hoc basis between cities and villages, packed with Congolese people transporting various types of cattle for sale. By taxi Taxis in Brazzaville are green. 700 CFA will often bring you around a neighborhood. At night,...

To enter the Republic of Congo, all foreigners must get a visa. Except for residents of a few West and North African nations, visas are not available on arrival, and arriving without one may result in a variety of problems that you should avoid at all costs (fines, passport...

Food in Congo Osaka Restaurant in Pointe Noire serves delicious and nutritious Chinese cuisine. A dinner cost between US$12 and US$18 on average. All meals were delivered in excellent clean plates, and the restaurant is inside and has air conditioning, as well as a backup generator just in case. Some...

The Congolese culture has been affected by a diverse range of natural environments, including the savannah plains of the North Niari flooded forests, the vast Congo River, the steep mountains and forest of Mayombe, and 170 kilometers of beaches along the Atlantic coast. Once upon a time, the existence...

Stay Safe in Congo Petty street crime against foreigners is uncommon in Brazzaville. Muggings and pickpocketings, on the other hand, are common around the ports in Pointe Noire and Brazzaville, as well as in the Congolese districts surrounding Brazzaville's City Center. Criminals are known to target middle-class and wealthy homes...