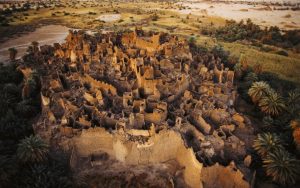 Niger is a politically unstable country with extensive lawlessness. The most recent coup in early 2010 exacerbated the dangerous situation, and every visitor should carefully monitor independent news and maintain touch with their embassy. Vicious and cruel Al-Qaeda and Boko Haram militants are active in Niger and have abducted and murdered numerous people, therefore it is critical to be aware of and avoid off-limits areas.

In the last sixteen years or so, there have been many carjackings, kidnappings, and robberies in the area north of Agadez. The issue persists to this day, and visitors should expect the region to be basically lawless. Even if you have a guide and a 4×4 vehicle, you should not go beyond Agadez unless you are very confident in your abilities. The roads beyond this point are of poor condition, and robbers abound.

Avoid traveling in a private car late at night. Armed robbers sometimes operate between Galmi (central Niger) and Dosso-Doutchi (western Niger), as well as on the route to Gao, Mali in the Tillabery area. Normally, police roadblocks on major roads restrict criminal activity throughout the day.

The most common annoyances are young boys screaming “Anasara,” which means “foreigner” in most local languages and is taken from the Arabic term. Almost every time you encounter someone outside your hotel, you will be solicited for a cadeau. The term is French meaning ‘gift,’ and it is important to remember not to prolong the anguish this phrase causes to foreign workers in the nation.

Niamey has a higher degree of safety. You should be OK if you avoid markets after dark, use cabs, and take EXTRA precautions to avoid areas where roadways straddle ravines. There is a danger of pickpockets or purse straps being cut at marketplaces, but you are more likely to lose money if you haggle badly and in French.

Carrying a bag and a camera, seeming to be a tourist, and being white would undoubtedly attract unwelcome attention. The majority of the attention is from individuals attempting to legitimately get your money, either by selling you a toothbrush or by begging, but there are always a few dishonest people.

The Centers for Disease Control and Prevention is a great source of reliable health information for visitors visiting Niger.

Drink plenty of water when in Niger since the dry heat can dehydrate you without you realizing it. It is the most effective preventive measure you can take. Bottled water or water sealed in a bag (called pure-wata) is available in most places, although in a pinch, city tap water is well-chlorinated (according to one tourist; another American who lived in Niger for two years advises never drink unfiltered water anyplace! — even ice!). Well water, stream water, and country water should be avoided at all costs.

Make sure to refill both your salts and your drinks.

Wear loose, conservative clothing, a large hat, and plenty of sunscreen. If in doubt, dress like the natives do.

Malaria, particularly encephaletic malaria, is a concern in Niger, and it is chloroquine resistant in Niger. Take your precautions, use heavy-duty insect repellent (DEET is the best, but it is unpleasant), and consider sleeping beneath a mosquito net.

Giardia and amoebic dysentery are both very frequent. Unless you purchase it fresh from the grill, be cautious of any roadside food. Even fried foods may make you ill if the oil has been extensively used and is old. Salads and raw vegetables should be avoided. In addition, never consume unfiltered water (including ice).

Because schistosomiasis is prevalent in most water bodies in Niger, visitors should avoid swimming anywhere – except in chlorinated swimming pools.

If you are unable to maintain your health, the Clinique Pasteur (located in front of the Lycée Fontaine) offers clean facilities, sterile needles, and skilled, compassionate physicians. There are numerous clinics nearby, including the Clinique Gamkalley, but be wary of unclean needles, over-prescription, and pushy personnel.

Niger's government and people celebrate a total of twelve official public holidays. International commemorations, significant events in Niger's history, and religious festivals are among them. As official public holidays, both Christian and Muslim holidays are celebrated. While France, the previous colonial authority, established Christian observances, the overwhelming majority of...

Nigerien culture is characterized by diversity, a result of the cultural crossroads that French colonization molded into a united state at the turn of the twentieth century. In the pre-colonial era, Niger was formed from four distinct cultural areas: the Zarma-dominated Niger River valley in the southwest; the northern...