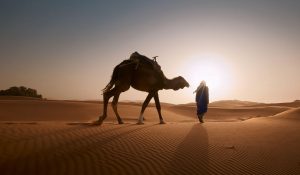 Hotels in Morocco are a matter of choice and suit every budget. Classified hotels range from 1 star (basic) to 5 stars (luxury) and are classified as auberge, riad, rural gîtes d’étape or hotel. Stays usually include breakfast, and many include dinner.

Auberges are located in the countryside or in small rural towns and are built in the traditional mud style (kasbah), many with wood-burning fireplaces and lounges or roof terraces for taking meals. Auberges are very pleasant, often small, typically family owned as well as family run.

In Marrakech, Essaouira and Fez, or anywhere there is a medina (old town), small hotels renovated from old houses are called riads. Riads are usually small (about 6 rooms or less), clean and charming, often with a beautiful walled garden where breakfast is served in a courtyard or on a roof terrace. Riads are usually too small to have a swimming pool, but may have what is called a small plunge pool to cool off in the summer months. Some of the riads are located in former trader’s houses or palaces and sometimes have large luxurious rooms and gardens.

Gîtes d’étape are simple country inns and hostel-like accommodation where mountain hikers can get a hot shower, a good meal and a roof over their heads for the night.

Desert bivouacs are traditional nomadic carpet wool tents with a mattress, sheets and blankets. Showering is available at the auberge, as well as breakfast.

Otherwise, there are the usual more modern hotels or equivalents found throughout Morocco’s major cities and larger towns. At the lower end of the budget scale, HI youth hostels (dorm beds from around MAD50) can be found in the larger cities, while the cheapest budget hotels (single rooms from around MAD65) are usually in the medina. These hotels can be very basic and often have no hot water or showers, while others charge between MAD5 and MAD10 for a hot shower. Consider public hammams instead, of which there are plenty in the medina and rural areas.

Newer, cleaner and slightly more expensive budget (single rooms from around MAD75) and mid-range hotels scattered throughout the ville nouvelles.

Many hotels, especially those in the medina, have charming roof terraces where you can sleep if it’s too hot. If you don’t need a room, you can often rent mattresses on the roof from MAD25.

For those who want to camp, almost every town has a campsite, although these can often be a little outside the centre. Many of these sites have water, electricity and cafés. In most rural villages and towns, it is common for the locals to let you camp on their grounds.

With the exception of the large high-end hotels, you should expect that the hot water supply in hotels is not as stable as in more established countries. In Marrakech, MHamid, near Ourzazate and possibly other places, the hot water temperature fluctuates dramatically while you are taking a shower.

In most places, both urban and rural, you have the option of sleeping on the roof or terrace. This will usually cost you MAD20-25 and you will be provided with mattresses and a warm blanket. Just ask the receptionist at the hotel/auberge/gite. If you want to ask in French, which works quite well, you can say ca sera possible de dormir sur la terrace, s’il vous plait? Often you can negotiate the price and if it is more than 30 dirhams, you should haggle.

Food in Morocco Moroccan cuisine is often described as one of the best in the world, with countless dishes and variations that proudly bear the country's colonial and Arab influences. Unfortunately, being a tourist in Morocco, particularly if you are on a budget, you are often restricted to a small...

Stay safe in Morocco Overall, Morocco remains a relatively safe country; however, homosexuality is criminalised and punishable by up to 3 years in prison in both Morocco and Western Sahara. Gay and lesbian tourists should be confident and cautious. In 2014, 70-year-old British traveller Ray Cole was prosecuted and imprisoned...