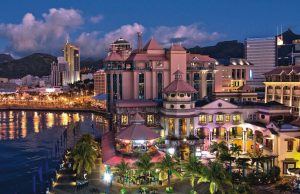 Crime rates have dropped in recent years and Mauritius is a much safer country for visitors than most other destinations. Tourism police and coastguards regularly patrol areas frequented by tourists, and most towns, beaches and other major attractions are monitored by cameras. Nevertheless, use common sense and watch out for suspicious behaviour, as you would anywhere in the world.

Mauritius is a risk area for infection with dengue fever, also known as “bone-breaking fever” because of the muscle paroxysms that are sometimes triggered. A vaccine is not available. Although, there are no recorded cases of dengue fever for several years in the country.

Since 2005, a certain species of mosquito called Aedes albopictus causes the viral disease chikungunya during the high season and the insect is more common during the day.

It is important to always use mosquito repellent. Mosquitoes are more common in rural areas, but they can also inhabit the beach in the tourist zone and cause swollen joints and/or rashes. Symptoms last from a week to several months, depending on how badly you are affected. Some people recover quickly, but it can take several months to fully recover.

In 1991, 86% of the population had antibodies indicating that they had been exposed to the hepatitis A virus, following an epidemic of the disease in 1989. Hepatitis A vaccination is generally recommended by the CDC for travel in East Africa (and most other places).

Depending on the season, many of the beaches are infested with sea urchins and it is not uncommon to see broken glass on the beach or in the water. If you venture into the water, you can either buy or bring your own plastic/wet shoes. This is usually not a problem in the big hotels as the designated bathing areas on the beaches are regularly cleaned of sea urchins and broken glass. Nevertheless, use wet shoes.

A neurotoxin similar but not identical to that found in Caribbean reef fish has been found in reef fish on Mauritius.

It is important that you do not eat peanuts or consume alcohol when eating coral or reef fish such as sea bass, snapper, mullet, grouper, there are many more. The toxic algae that grow on coral reefs are eaten by fish. Do not eat the guts or testicles of the fish as this is where higher concentrations of the toxin accumulate. Symptoms include gastrointestinal distress, vomiting and diarrhoea, and sometimes numbness in the arms and legs.

Food in Mauritius Gastronomes will find a variety of tastes and flavours inherited from different migrations throughout history. Culinary traditions from France, India, China and Africa have been passed down through generations. Depending on the region, rice or a type of flatbread called chapattis or roti, called farata (paratha) by the...