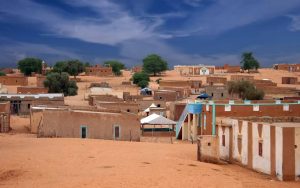 AfricaMauritaniaHow To Travel To Mauritania

Western Sahara, Mali, and Senegal all have open road borders with Mauritania. These borders are accessible by private automobile or bicycle, although the first two are very hazardous.

Near Nouadhibou, the route from the Western Sahara to Morocco enters the country. The route is paved all the way to the Moroccan border station in Fort Guerguarat, where a 7-kilometer stretch of winding, rocky, but straight pistes leads to the Mauritanian border, where the tarred road resumes. Despite the ease of driving, caution should be used while leaving the well-worn pistes between the two border stations, since the region is a minefield. Once you reach the tar on the Mauritanian side, the risk remains, and the region is not considered mine-free until you cross the railway line.

The procedures for crossing the border are simple. Transit visas, which are good for three days, are no longer available at the border, but this may change in the future. At the border, there is a bureau de change, a car insurance agency, and a slew of optimistic guides for the ancient desert crossing down to the capital.

From Mali, there are several pistes that go over the Mauritanian border. These used to be the de facto route between the two nations, but a new tar road now connects Mali’s Nara and Mauritania’s Ayoun al Atrous. Mali’s border procedures are performed at different locations around Nara town (local children will lead you to the police or customs for a small present). At a series of roadblocks along the border route, Mauritanian procedures are completed.

Traveling southeast from Néma, which is at the end of a decent paved road from Nouakchott, is an alternate land route that travels straight from Mauritania to Timbuktu, Mali. This dirt road continues to Bassekounou before crossing the border into Mali at Léré, where it improves to a decent dirt road that leads to Niafunké and Timbuktu.