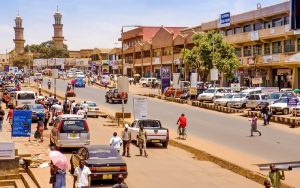 Before waves of Bantu peoples started immigrating from the north during the 10th century, the region of Africa today known as Malawi had a relatively tiny population of hunter-gatherers. Although the majority of the Bantu peoples moved south, some stayed and formed ethnic groupings based on shared ancestors. The tribes formed the Kingdom of Maravi around 1500 AD, which stretched from north of what is now Nkhotakota to the Zambezi River, and from Lake Malawi to the Luangwa River in Zambia.

Local tribesmen started meeting, dealing with, and forming alliances with Portuguese merchants and military personnel soon after 1600, when the region was largely unified under one native monarch. By 1700, however, the empire had disintegrated into regions ruled by a variety of ethnic groups. In the mid- 1800s, the Swahili-Arab slave traffic peaked, with an estimated 20,000 individuals enslaved and transported annually from Nkhotakota to Kilwa, where they were sold.

In 1859, missionary and explorer David Livingstone arrived to Lake Malawi (then Lake Nyasa) and discovered the Shire Highlands to the south of the lake as a viable location for European colonization. Several Anglican and Presbyterian missions were established in the area as a result of Livingstone’s visit in the 1860s and 1870s, the African Lakes Company Limited was founded in 1878 to establish a trade and transport concern working closely with the missions, and a small mission and trading settlement was established at Blantyre in 1876, with a British Consul taking up residence there in 1883. Because the Portuguese government was also interested in the region, the British government sent Harry Johnston as British consul with orders to negotiate treaties with local authorities outside of Portuguese authority in order to avoid Portuguese annexation.

The British Central Africa Protectorate was established in 1889 over the Shire Highlands, and it was expanded in 1891 to cover the whole present-day Malawi. The protectorate was renamed Nyasaland in 1907, and it remained that name for the rest of its British administration. The colonial administration of Nyasaland was established in 1891, and it is a classic example of what is often referred to as the “Thin White Line” of colonial power in Africa. The administrators were granted a yearly budget of £10,000 (1891 nominal value), enough to hire ten European citizens, two military commanders, seventy Punjab Sikhs, and 85 Zanzibar porters. These few personnel were then expected to manage and police a 94,000-square-kilometer area with a population of one to two million people.

The Nyasaland African Congress (NAC) was founded in 1944 by Nyasaland’s Africans to represent local concerns to the British administration. For purely political reasons, Britain joined Nyasaland with Northern and Southern Rhodesia in the Federation of Rhodesia and Nyasaland, often known as the Central African Federation (CAF), in 1953. Despite the Federation’s semi-independence, the connection sparked African nationalist resistance, and the NAC acquired public support. Dr. Hastings Banda, a European-trained doctor practicing in Ghana who was persuaded to return to Nyasaland in 1958 to aid the nationalist movement, was a powerful opponent of the CAF. Before being imprisoned by colonial authorities in 1959, Banda was chosen president of the NAC and sought to mobilize nationalist enthusiasm. In 1960, he was freed and invited to assist in the drafting of a new constitution for Nyasaland, which included a provision giving Africans a majority in the colony’s Legislative Council.

In the Legislative Council elections in 1961, Banda’s Malawi Congress Party (MCP) won a majority, and he became Prime Minister in 1963. The Federation was dissolved in 1963, and Nyasaland declared independence from British control on July 6, 1964, renaming itself Malawi. Malawi became a republic under a new constitution, with Banda as its first president. Malawi is now officially a one-party state, with the MCP as the sole legitimate political party. Banda was elected president for life in 1971. For almost 30 years, Banda ruled over a strict authoritarian system that kept Malawi free of violent strife. In exile, opposition groups such as Orton Chirwa’s Malawi Freedom Movement and the Socialist League of Malawi were formed.

Malawi’s economy under Banda’s presidency was often touted as an example of how a poor, landlocked, densely populated, mineral-poor nation might make agricultural and industrial growth.

Banda built a commercial empire while in power, utilizing his control of the nation to generate one-third of the country’s GDP and employ 10% of the country’s wage-earning population. Banda invested all of his earnings towards Malawi’s development, which was symbolized by the construction of Kamuzu Academy, a prestigious boarding school (Eton of Africa). The motivation for giving this school to Malawi was, in Banda’s own words, “I do not want my sons and daughters to have to do what I had to do – to leave their homes and families and travel away from Malawi to obtain an education.”

In 1993, under demand for more political freedom, Banda consented to a referendum in which the people voted in favor of a multi-party democracy. A presidential council was established in late 1993, the life presidency was abolished, and a new constitution was enacted, thus terminating the MCP’s reign. In 1994, Malawi had its first multi-party elections, and Banda was defeated by Bakili Muluzi (a former Secretary General of the MCP and former Banda Cabinet Minister). Muluzi was re-elected president in 1999 and served until 2004, when Dr. Bingu wa Mutharika was elected. Although the political climate is characterized as “difficult,” Malawi’s multi-party system is still in place as of 2009. In May 2009, Malawi conducted its fourth multiparty legislative and presidential elections, with President Mutharika re-elected amid allegations of election fraud from his opponent.

Some saw President Mutharika as being more dictatorial and contemptuous of human rights, and demonstrations erupted in July 2011 over rising living expenses, devolving international relations, bad administration, and a shortage of foreign currency reserves. The demonstrations resulted in the deaths of 18 persons and the injuries of at least 44 more. Mutharika died after a heart attack in April 2012, and former Vice-President Joyce Banda became the presidency.

Joyce Banda finished third in the 2014 elections and was succeeded by Arthur Peter Mutharika, the brother of Malawi’s third-elected president.

The Malawi kwacha, abbreviated MK, is the local currency, and its ISO 4217 international currency code is MWK. The currency may be changed at any time (but impossible to get rid of outside the country) Almost everyone will take "hard" foreign currency (Forex), especially for bigger transactions. Xpats in Malwai...

Food in Malawi Malawian cuisine is based on a single staple, maize, which is presented in one form, nsima(n'SEE-ma). Nsima is a thick porridge that is shaped into balls with your right hand and dipped into relishes, which include a variety of stews. Others who can afford them eat beef,...

Stay Safe in Malawi Malawi has long been regarded as "Africa's Warm Heart," with Malawians renowned for their warmth and hospitality. Malawi is not a particularly hazardous place to visit for foreigners and expats from the West. Muggings and robberies have been reported in the major cities, particularly Lilongwe, as...