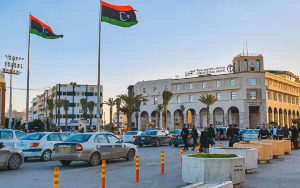 How To Travel To Tripoli

How To Get Around In Tripoli

Things To Do In Tripoli

Alhamra Museum of Assaraya (Red Castle Museum). Libya’s national museum, which spans 5,000 years of history. Located on the fringes of the medina, in a large palace complex with multiple courtyards that dominates the city skyline. Several Ottoman-era classical sculptures and fountains can be seen around the castle.

A growing number of palaces (particularly during the Karamanli era) are being renovated and made public. The medina’s fundamental street design was established during the Roman era, when the walls were built to defend the city from invasions from the interior of Tripolitania, and is considered well-planned, maybe even better than current street patterns. A sea-facing wall was erected to the city in the eighth century.

Bab Zanata in the west, Bab Hawara in the southeast, and Bab Al-Bahr in the north wall offered access to the ancient town.

The city walls remain intact and may be scaled for excellent views of the city. Fine jewelry and clothing may be bought in the local marketplaces, and the bazaar is especially noted for its traditional crafts. Libya’s national museum is housed in a beautiful contemporary structure in the Red Castle. Many artifacts from the country’s Roman and Greek eras are on display, including gems from the World Heritage sites of Leptis Magna and Sabratha, as well as politically charged exhibits like Gadaffi’s Volkswagen Beetle automobile from the 1960s.

Martyrs’ Square is located in the heart of the city. Green Square was the previous name for this area. This is a well-liked meeting spot. The historic city walls may be seen from here. Some of the retail streets begin here as well. The plaza is often utilized for rallies (mostly against the Syrian administration) and as a display area for motorcyclists. There is little to see in the plaza itself.

How To Travel To Tripoli

Visas will be required, which may be obtained via embassies or consulates. Roughly US$50–150, you need secure the visa ahead to arrival and be prepared to get your hands on a lot of information; it's better to call first for the most up-to-date criteria, since they change on a...

How To Get Around In Tripoli

Walking is the greatest method to explore Tripoli; there are many of wonderful guides (books) out there to assist you, as well as some half-useful Libyan versions. The folks are welcoming and curious. However, if you're a westerner or stand out like a sore thumb in comparison to a...

Things To Do In Tripoli

Prior to the 2011 hostilities, the city had a reputation for being an excellent spot to get away from the stresses of contemporary life. It may be prudent to wait until things have restored to some kind of normalcy before stepping out, although there are beautiful beaches within driving...

Tripoli's cuisine is of high quality and, by Western standards, reasonably priced. The food is largely Arabic, so don't anticipate a lot of variation. The odds of acquiring food sickness are small, but watch out for the fish. If you do feel compelled to taste the sea's bounty, just...

Marks and Spencer, Mango, and H&M are among the well-known stores in Tripoli. In compared to the United Kingdom, prices are comparable. Clothes The greatest clothes stores are located around Martyrs Square and stretch up to the old cathedral. Shoes and the normal knitwear, which looks to be of decent...