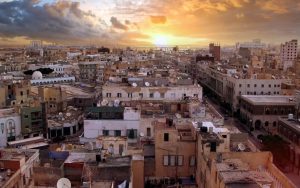 There are a variety of lodgings accessible in major cities, ranging from modest hotels to four-star facilities. As a result, prices differ.

There are four international-standard hotels in Tripoli: the Radisson Blu, Al Waddan, and Rixos Al Nasr are brand-new (opened in 2009/2010) and offer excellent accommodations and services, while the older Corinthia Hotel is located adjacent to the old city and offers excellent accommodations and services (The Medina or “Al Souq Al Qadeem”). Bab-Al-Bahr, Al-Kabir, and El-Mahari are some of the other hotels. Several smaller hotels have developed throughout town, such the Zumit Hotel in Bab-Al-Bahr, which is an ancient, nicely restored hotel adjacent to the Old Roman Arch.

The Manara Hotel, a well-kept four-star establishment in Jabal Akhdir, east of Benghazi, is located close to the Appolonia Port ancient Greek ruins.

While it seems to be dwindling as more tourists arrive each year, Libyans have a long history of welcoming visitors into their homes and lavishing hospitality on them. In smaller towns and villages, this is especially true.

The Marhaba hotel, in Tripoli’s Dhahra neighborhood, is one of many excellent hotels close the church.