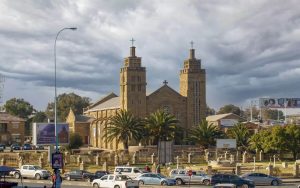 Traditional musical instruments include the lekolulo, a kind of flute used by herding boys, the setolo-tolo, a mouth instrument played by men, and the stringed thomo performed by women.

Lesotho’s traditional form of dwelling is known as a mokhoro. Many older homes, particularly in smaller towns and villages, are of this style, with walls often made of big stones glued together. Baked mud bricks and, in particular, concrete blocks are still used today, and thatched roofs are still prevalent, though they are often replaced with corrugated roofing sheets.

The Basotho blanket, a thick covering made mainly of wool, is essential to traditional clothing. The blankets are widespread across the nation in all seasons, and men and women wear them differently.

The Morija Arts & Cultural Event is a well-known arts and music festival in Sesotho. It is conducted each year in Morija, the historical village where the first missionaries came in 1833.

By plane Maseru is 18 kilometers from Moshoeshoe Airport. Daily flights between Maseru and Johannesburg are operated by South African Airways and Airlink, with fares averaging about ZAR1,400. Luggage is often misplaced, and there is no mechanism for reporting missing luggage. You should schedule a cab pickup ahead of time...

Maseru has many Western-style stores where you may stock up on goods before going further in the nation. If you're looking for locally produced products and crafts, skip Maseru and go to TY or Hlotse, where the markets are much better and cheaper. Traditional Basotho hats (Mokorotlo), sticks (molamo), carpets,...

There are many internet cafes in Maseru, and although they are reasonably priced (about LSL0.20-0.50 per minute), they are at best sluggish. The mobile network is adequate in cities but deplorable in the countryside. Vodafone is the only British mobile phone network that has a roaming agreement. Lesotho has two...

Before visiting Lesotho, try to learn a few Sesotho terms. The locals value a foreigner who has taken the time to learn their language. Always address an elder or someone of better social status as N'tate (male) or M'e (female). Hello is Lumela (pronounced due-mela). As a result, you'd say...

The San people were the indigenous occupants of what is now Lesotho. Examples of their rock art may be seen across the area's mountains. In 1822, King Moshoeshoe I established the current Lesotho, then known as Basutoland, as a single state. Moshoeshoe, the son of Mokhachane, a Bakoteli lineage minor...

It is dangerous to stroll alone in Maseru. Friendly conversations with locals may evolve into disguised pleas for money, as they do pretty much everywhere else in the globe – adhere to your beliefs and only donate to recognized organizations. Driving past red lights at night is the standard — not...