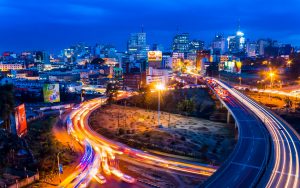 KenyaNairobiHow To Get Around In Nairobi

Traveling around Nairobi should be done with caution. Like any other large city, traffic is awful, but if you use common sense and a local or guide, you should be able to get where you want to go.

Renting a vehicle is useful since it enables you to explore Nairobi at your leisure. Self-drive and chauffeured options are available from most rental providers in Nairobi. A substantial number of the automobiles offered for rental are Japanese: Toyota, Nissan, and Mitsubishi. Both automatic and manual transmissions are available for rental. Right-hand driving is standard on all rental vehicles.

The number of days and projected miles per day are often used to set automobile rental costs. Some automobile rental businesses may offer you a 50% discount but will either give you a contract with a condition restricting you to specified destinations, an outdated car, or a large deposit. If you rent a vehicle for a week, a month, or a year, the charges are lower. The majority of automobile rental tariffs include unlimited mileage, comprehensive PSV insurance, and theft and damage waivers.

Some firms need you to hire a driver if you are using a big 4X4/4WD vehicle (e.g a Toyota Prado, Land Cruiser j70, Range Rover, Land Cruiser VX, Land Rover discovery). The cost of a driver varies, but as of April 2015, the daily rate was KES 2500, which included meals and lodging.

Although a large majority of local vehicle rental firms are trustworthy, it is recommended that you either take photographs of the automobile before renting it or carefully note and agree on any dents or scratches. In addition, examine the rental contract carefully for insurance liability requirements in the event of a vehicle accident or theft.

Taxis are neither inexpensive nor plentiful. Prior to the trip, prices should always be negotiated and paid (only cash is accepted, often with limited change available). This can be difficult because you must be familiar with the market rate price of the ride you want to take. Taxis are usually parked near hotels, malls, and tourist attractions. Taxis are usually identified by a yellow line on either side. Ask a local or inquire at your hotel for further information.

Due to its convenience, cost competitiveness, and higher quality of service when compared to other taxi providers, Uber has become the hired car provider of choice among Nairobi’s large expatriate population.

Davina Cabs is a good option if you want a pre-arranged taxi with consistent pricing. They provide taxi services in Mombasa, Nairobi, Kisumu, and Eldoret, where they just built an office.

Matatus (public minibuses/commuter buses) are often utilized to travel between Nairobi’s central business district and the outskirts. Matatus come in a variety of sizes, ranging from 14-seat vans to 50-seat buses. While matatus are typically safe, they are involved in a large number of accidents each year. Matatus are often packed, with more passengers than seatbelts, making them risky in the event of an accident. Matatus are often improperly driven, with drivers passing on curbs, speeding, or driving in oncoming lanes when automobiles are impending, due to the lack of license requirements. On each bus, a conductor will stand outside the matatu and announce the fee (typically between KES10 and KES40) and the destination. In order to reduce traffic and accidents in Nairobi, the government has decided to prohibit 14-seat matatus from entering the city starting in January 2011. The City Hoppa bus service, as well as the recently restored Kenya Bus Service, are perhaps the finest options. Beware of traffic congestion on major routes at all times, not just during rush hour.

Nairobi is a relatively simple city to walk about since it is small and things are easily accessible. However, there are several places of the city where visitors should avoid going, and nighttime wandering should be avoided. Many places are infested with thugs. While some may consider walking through the city center to be safe, it is not a pleasant experience. Expect to be contacted by beggars, touts, and other types of people.

Nairobi may be renowned as Africa's safari capital, but the city has managed to stay up with modernisation. Nairobi, unlike other towns, is surrounded by the Nairobi National Park, which covers 113km2 (70 mi2) of plains, cliffs, and woodland. There are several things to do both during the day...