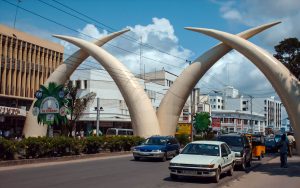 Given Mombasa’s turbulent past, it’s surprising that there are just a few attractions. Nature and a variety of diverse activities are what attract people to Mombasa. Additionally, there are a few landmarks located between 20 and 30 kilometers north, west, and south of Mombasa.

Fort Jesus is Mombasa’s most popular attraction. Built between 1593 and 1596 by the Portuguese to defend the port from the Ottomans, this fort served in a military capacity for more than three centuries. It was named after the Portuguese squadron that sailed under the Order of Christ’s banner (Ordem de Nosso Senhor Jesus Cristo). Since 2011, the fort has been a UNESCO World Heritage Site. Fort Jesus houses antiquities from the time when Mombasa served as a slave trade transit port. There are torture chambers, jails, and several more 16th-century exhibits. The fort served as a jail during the British time, and currently a portion of the cells serves as a museum. Numerous artifacts are on loan from the Portuguese frigate Santo António de Tanna, which drowned in 1697. They include African and Indian ceramics, Chinese porcelain, various crew items, and two bronze cannons. Another section of the collection is devoted to archaeological discoveries made along Kenya’s coast. Additionally, there is Arabic military equipment, musical instruments, and a collection of 18th and 19th century cannons. A 105mm cannon from the Imperial German Navy is on display in the tiny park next to the entrance. As of 2013, KES1500 (adults) and KES750 (children).

Old town, Districts of Makadara and Mzizima. Situated along Tudor Creek north of Fort Jesus, these areas make up the old city. It is an example of classic Swahili architecture with a considerably more calm environment than the rest of the city. Much of it has been turned into souvenir shops and restaurants and here you may discover artisanal boutiques offering silver jewellery and tiny furniture. If you are scared about getting lost amid the little streets or don’t want to miss anything, there are guides at the esplanade of Fort Jesus that can tour you through the ancient town for KES1000. A lovely area to explore on a Sunday when most of the city is closed down.

The tusks of Moi avenue

The tusks were constructed in 1956 to greet Princess Margaret on her visit to Mombasa town. Today, they are arguably of Mombasa’s most recognizable monuments. They are positioned at the city’s entrance and are constructed of steel, not ivory, as is frequently assumed. Notable is the fact that the tusks form an M. (which stands for Mombasa).

Leven Residence. This structure served as the headquarters for the British Navy’s anti-slavery activities in the area throughout the nineteenth century. It was named after a British battleship. Later, missionaries, a shipping firm, and a consulate utilized the building. Today, this ancient structure houses a restaurant.

The neo-Gothic structure in the heart of Mombasa is a recognizable landmark and the seat of the Roman Catholic Archdiocese of Mombasa.

Mombasa has numerous lovely Hindu temples (mandirs) to visit as a result of its Indian population. Tourists/visitors are permitted to enter the temple escorted by a temple guide. There are antiques, idols, and cultural images/paintings within.

It is the world’s oldest Swaminarayan Hindu temple, having been built in 1957.

This complex of 8100m2 serves the Krishna Consciousness community and includes a vegetarian restaurant.

The surroundings make this Sikh temple worth seeing.

A 20-hectare park featuring a farm of over 10,000 crocodiles as its main feature. There is horseback riding and camel riding available, as well as a café and bar in the park. When the crocodiles are fed, the optimum time to visit is about 17:00.

The Tudor Creek’s mangrove woods, which are formed by the Kombeni and Tsalu rivers, may be visited. To accomplish so, request a ride from a fisherman near Cape Kiberamni or Junda Creek. The price is negotiable.

A 75-hectare zoological park built on the place of a former coral reef in 1985. Giraffes, hippos, monkeys, and reptiles are among the animals. Owen and Mzee are two well-known animals in the park. The first is a hippopotamus orphaned by the 2004 tsunami, while the second is a turtle who “adopted” the juvenile hippo, much to the scientists’ surprise. Between the hours of 14 and 15, when the animals are fed, is the optimum time to visit. English, Spanish, French, and other languages are spoken by the guides. Keep an eye out for the monkeys; they’re plentiful and look nice, but they may bite. As of 2013, KES1600 was used.

Mombasa is a vital transportation hub for all modes of travel. It is the terminus of both the Transafrican Route 8 from Lagos and the Uganda railway. It is served by an international airport, Moi Airport, and one of the most significant ports in Eastern Africa, Kilindini, which also...

In Mombasa, there are no traffic signals, and the traffic will look chaotic to a westerner. Even when police are present, traffic regulations are disobeyed.BY MINIBUSIn the city, there is no regular public transit. The aforementionedmatatus (minivans), of which there are around 3500 in the city (licensed ones with stickers...

Things To Do In Mombasa

BeachesWhile the 13.5 kilometers of white sand beaches along the coast may entice you to spend your days lazing in the sun and water, Mombasa also offers a variety of other activities. All beaches in Kisauni offer camel rides, and motorcycles can be rented at Jomo Kenyatta Public Beach...

Mombasa is a multicultural city with influences from Arabic, Chinese, European, and Indian cuisines. Numerous indigenous cuisines include coconut, such as waly ya tui (basmati rice with coconut milk), kuku wa kupaka (chicken with coconut milk), and mahamri (coconut donuts with cardamom).Budget restaurants in MombasaMvita and tourist hotspots like...

In tiny stores, bartering is popular, as it is across Africa. The first price is frequently greater than what is ordinarily paid for the product, especially if you are an evident foreigner.The areas of Kinyozi, Mwembe, and Tayari, which surround Haile Selassie Road and Biashara Street, are the greatest...

In Mombasa Town and the North Coast, there are several nice bars, pubs, and entertainment venues. In Mombasa and the settlement of Mtwapa, the nightlife is highly active (15km north of Mombasa, called "the village that never sleeps").Jahazi Coffee House Ndia Kuu Rd,   +254 726 409436, e-mail:[email protected] daily 8-19:30. Arabic teas and coffees...

Throughout the year, there are a variety of events:Marathon and triathlon The International Triathlon Federation has been organizing this event in the Southern Hemisphere autumn since 1985. A annual triathlon race has been held in the Austral spring since 2006.European film festivalCoin de Moi Avenue and Kwa Shibu Road(localities of...

Emergency number: 112Stay Safe in MombasaSeveral nations have issued warnings that the city center is unsafe at night, that carjacking is common, and that robberies on the beaches after sunset are possible. When it comes to your surroundings, use common sense and a healthy dose of skepticism.Taking pictures or filming...