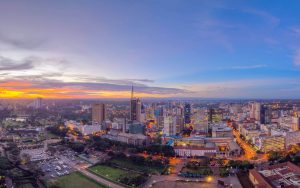 There are many different cuisines and types of restaurants in Kenyan cities, from fast food to high-end western cuisine. Kenyan cuisine varies greatly from one ethnic group to another, but the staples are ugali (corn dough), pilau rice, cabbage vegetables, chapati (Indian flat bread) and grilled food (usually chicken, beef or goat). Fresh produce is also available at the street food stalls, which offer a wide variety of fruits and vegetables depending on the season. Street food is also worth a try and is generally safe. Typical dishes are mandazi (a sweet bread-like fritter), grilled corn with chilli and samosas.

There are many restaurants catering to foreigners in Nairobi city centre and in the Westlands, Hurlingham, Kilimiani and Lavington areas. There are Italian, Brazilian, Chinese, Thai, Japanese, German and French restaurants. The Westlands also has a high concentration of Indian cuisine due to the large Kenyan and Indian community in the area.

The Kenyan beer is excellent and has won several international awards. The local favourite is Tusker, a brand of the East African Breweries Company. Imported beers are available but not very popular due to high retail prices caused by import duties and local people’s loyalty to their own products. In recent years, breweries such as Brew Bistro and Sierra in Nairobi have taken the initiative to offer Kenyans their own products, which has attracted the attention of expatriates and tourists because of the sweetness of their creations.

A wide range of imported and locally produced wines and spirits are available. It is advisable to avoid local beers such as “changaa” and “busaa”, which are illegal, brewed in unhygienic conditions and whose consumption has led to many deaths. It may be useful to remember that “changaa” literally means “kill me quickly” before deciding whether or not to drink a glass of the drink offered.

There is an excellent selection of soft drinks, mainly from the Coca-Cola stable, but also try the locally produced Stoney “Tangawizi” Ginger Ale.

It should also be noted, as is common in many African countries, that when you return an empty glass drink bottle to certain traders, they will refund part of the price you paid, called a deposit, which covers the cost of the lost bottles.

By plane Kenya Airways (KQ) is the national airline and one of the largest and most renowned in Africa. KQ has numerous regional (e.g. to Johannesburg, Harare, Cairo, Entebbe, Accra, etc.) and international (e.g. to Dubai, London, Amsterdam, Mumbai, etc.) connections. It is also an associate member of SkyTeam. Kenya has...

With plane Most international visitors will arrive via Nairobi's Jomo Kenyatta International Airport (JKIA) (NBO). If you are already in Nairobi and need to drive to the airport, please allow at least 2 hours as the main road to the airport is very busy and security checks are lengthy. Kenya Airways...

Cities Nairobi - Kenya's capital and economic centreGarissa - a predominantly Muslim town in the east, near Somalia.Kisumu - the largest city in the west, on the shores of Lake VictoriaLamu - Main town of the Lamu archipelagoLodwar - to the north, on the main road to southern Sudan with...

Although Kenya is predominantly Christian and reasonably liberal, there are areas with a strong Muslim influence, such as the coastal regions, where it is considered indecent to wear short dresses. This is also true in Christian rural areas. However, the inhabitants are extremely friendly. Beachwear is accepted on the beach,...

Internet Internet cafés are common throughout Kenya and usually offer decent connection quality. Expect prices around 0.50c/1KSh per minute. Most internet cafés now charge 0.50c KES per minute. Mobile providers Safaricom, Airtel, Orange Telkom and YU: After buying a starter SIM card, you can go online immediately if you have an internet-capable...

Kenya's culture consists of a variety of traditions. Kenya does not have a single outstanding culture that identifies it. Instead, it is made up of the different cultures of the country's diverse communities. Notable groups include the Swahili people in the coastal areas, a number of other Bantu groups in...

Swahili Culture and Trade (1st century-19th century) On the Kenyan coast there were communities of iron traders and the Bantu subsistence farmers, hunters and fishermen whose economy was supported by agriculture, fishing, metal production and foreign trade. These communities formed the early city-states of the region and were collectively known...

Stay safe Although Kenya is generally safe, there have been recurrent outbreaks of jihadist activity as well as the uncharacteristic post-election violence in January 2008 following a disputed presidential election result. Stay alert when walking or driving through Nairobi. You should always make sure you are aware of your surroundings and,...